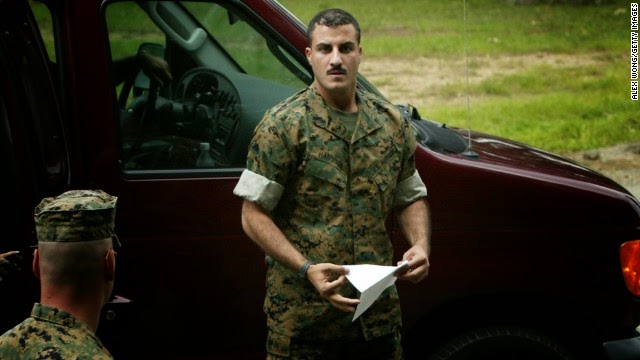 He's a dirtbag, of course:

A U.S. Marine corporal who was declared a deserter twice has turned himself in to authorities and is on his way to Virginia.

Cpl. Wassef Ali Hassoun failed to report for duty in January 2005 at Camp Lejeune, North Carolina, the Marine Corps said in a statement. He is expected to arrive in Norfolk, Virginia, on Sunday.

"The Naval Criminal Investigative Service worked with Cpl. Hassoun to turn himself in and return to the United States to face charges under the Uniformed Code of Military Justice," the statement read.

Hassoun, 34, is believed to have been in Lebanon for much of the time he was gone, according to a U.S. official who was not authorized to talk to the media. It was not immediately clear where he turned himself in to authorities.

Before his 2005 disappearance, he had disappeared in Iraq, just one year earlier. The Marines charged Hassoun, who served as a truck driver and translator, with desertion and theft.

Now, if they release him on his own recognizance, and if they ask him to stay in the barracks and report to the duty officer at 9 P.M. every night, and if they let him have car keys and the run of the bars outside of the base, well. I'm sure he won't run off or anything because he clearly doesn't seem like the kind of guy who would do that.

Hassoun is no different than Bergdahl or any of the other dirtbags who have dirt bagged their way into the hearts of people everywhere--he held up his hand, swore an oath to defend this country, and then decided, nah.
on June 30, 2014