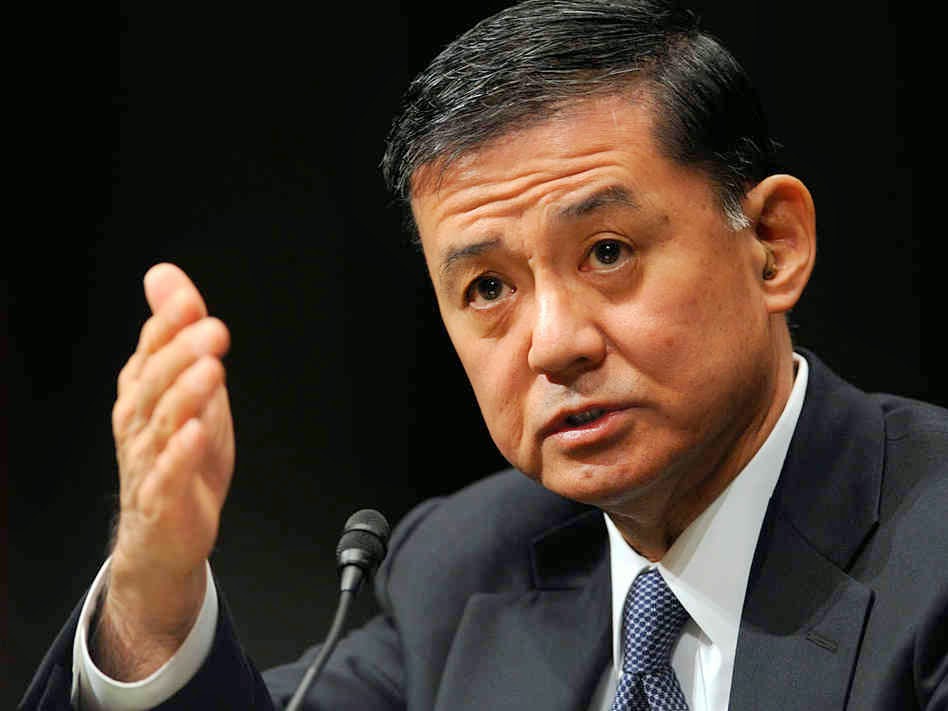 The House Veterans Affairs Committee voted Thursday to subpoena Veterans Affairs Secretary Eric Shinseki in the wake of his department being accused of deadly delays in health care at some of its hospitals.

The Shinseki subpoena will cover e-mails that allegedly discussed the destruction of a secret list, first reported by CNN, of veterans waiting for care at a Phoenix VA hospital.

The panel agreed to issue the subpoena in a voice vote Thursday morning.

Shinseki told the Wall Street Journal on Tuesday that he would not resign over allegations that U.S. veterans died awaiting care at VA hospitals across the country, including in Phoenix.

America's veterans need a better and more effective advocate. Thank you for your service, Secretary Shinseki, but it's well past the time to resign and you should probably take most, if not all, of the people working for you out the door.
My guess is that the Obama Administration does not want to have to find a new VA secretary at this time and that there is already going to be quite the circus in the Congress over Benghazi. This is why they should have gotten rid of Shinseki a year ago. The Phoenix VA hospital is but one of the many failures of his tenure. The whole story of the VA's inability to deal with incompetence reads like a Stephen King novel.

Officials with the VA Pittsburgh Healthcare System have botched the handling of a deadly Legionnaires’ disease outbreak at nearly every turn. Five veterans are now dead from the pneumonialike disease. But instead of giving those who failed to prevent the outbreak pink slips, VA gave them glowing performance reviews and huge bonuses.

According to the Centers for Disease Control and Prevention, up to 21 veterans were sickened between February 2011 and November 2012, but that didn’t stop VA Pittsburgh Director Terry Gerigk Wolf from receiving the highest possible score on a VA performance review covering the bulk of the outbreak period.

Shockingly, Wolf’s review makes no mention of the outbreak, and instead praises her for leading a “groundbreaking Civility Initiative” and helping improve her employees’ resume-writing skills.

Most people would find VA’s celebration of Wolf and Moreland in the aftermath of a deadly outbreak they were too incompetent to stop hard to believe. Yet the situation is routine at the department, where failing executives have been collecting massive bonuses for years...

So, bear in mind that a deadly level of incompetence has infected the VA for years. Nothing about what happened in Pittsburgh affected what was going on in Phoenix because of the rot within the system and the belief that there was never going to be a real accountability moment for the people who were deliberately killing veterans because they didn't hold a single ethical position about their needs and their value as human beings. When you let someone die because you're afraid of losing your job, you are the worst kind of public servant. You're more ghoul than anything at that point. I mean, I understand why people steal. I don't understand how people can continue to pick up a paycheck when what they are doing is actually killing other people. That's sick.

Here are a few more examples:

A VA executive in charge of the nearly 60 offices that process disability benefits compensation claims collected almost $60,000 in bonuses while overseeing a near seven-fold increase in backlogged claims.

A VA health official in New York pocketed nearly $26,000 in bonuses while presiding over chronic misuse of insulin pens that potentially exposed hundreds of veterans to blood-borne illnesses.

Two April VA inspector-general reports identified serious instances of mismanagement at the Atlanta VA Medical Center that led to the drug-overdose deaths of two patients and the suicide of another. True to form, VA doled out nearly $65,000 in performance bonuses to the medical-center director who presided over the negligence.

In early May, I spent the day at the Atlanta VAMC, along with several members of Georgia’s congressional delegation. Hospital officials told us that although they had identified specific employees whose actions had contributed to patient deaths, no one had been fired.

When I asked a roomful of Atlanta VAMC leaders if there were any other serious patient-care incidents Congress needed to know about, they said no, failing to reveal a previously unreported suicide the media would expose just four days later.

It's time to put an end to this farce. If the end result is the death of patients, there has to be accountability and there has to be effective change in the wake of what happened. When your organization is failing, paying out bonuses is not the answer.
on May 08, 2014