The Law Does What It Is Supposed to Do 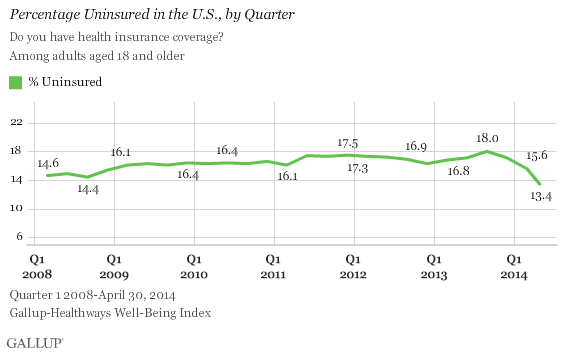 Victory sort of begins to look like this, my friends.

The fact that the Affordable Care Act has begun to offer affordable health care choices to the American people is no longer someone's feverish idea or pie-in-the-sky idea. It is no longer someone's flight of fancy or anything like that--it is an act which is driving down the rate of the uninsured in this country. Once the bandwagon starts, hopefully it will reduce this rate even further. It has already dropped it to a rate BELOW that of the end of 2008, which is just before the bottom fell out of the U.S. economy, killing jobs at a tremendous rate.

This is why the Republican Party is desperately trying to make Benghazi a thing when it is not a thing or a scandal or anything else. They have shit the bed and they have no ideas, no more help to offer the American people, just sackcloth and ashes and desperation and flop sweat.

What we need is a jobs bill. Put one million American back to work and give them a shot at Obamacare and you will see some major, major improvement in this country. No matter what--find a way to put people back to work and this economy will begin to life and premiums will be paid and people will start to breathe a lot easier. A lack of insurance creates fear and uncertainty and underemployment or plain old unemployment saps confidence and drains money from local governments in the form of consumption taxes not paid and benefits paid out. Reverse that and things get better. Money gets paid back into the coffers--you all know this.

The Republicans know it. They fear it. They want the mid-terms to be about failure and loss. They're the ones creating that for the American people. But our working media won't tell anyone the truth.