J. D. Gordon is a Jackass of the Highest Order 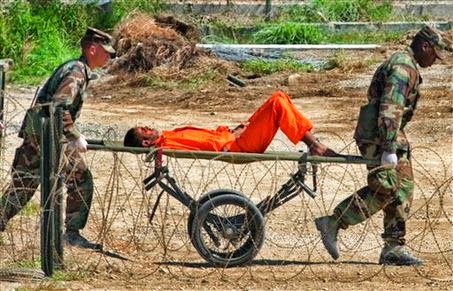 What is this bullshit?

Here’s another secret the White House doesn’t want you to know about the VA. Al Qaeda detainees get better medical treatment than our veterans.

Yes, it’s true. I know because I served as a Pentagon spokesman from 2005-2009 and visited Guantanamo Bay Naval Base over 30 times during those years.

Despite the fact that Al Qaeda terrorists carried out the Sept. 11 terror attacks, killing 3,000 people in America, the admitted co-conspirators and their roughly 150 fellow jihadists at Gitmo have approximately 100 doctors, nurses and health care personnel assigned to them.

Doctors and medical personnel are at their beck and call. Got a cold, a fever, a toothache, a tumor, chest or back pain, mental health issues, PTSD? No problem, come right on in. Military doctors are waiting to see you.

I mean, Jeebus. The brass balls on these people must click-click-click well into the night while they're spitballing and trying to come up with this stuff.

Guess who has tried, repeatedly, to close Guantanamo Bay? The Obama Administration. Guess whose Congress has blocked every attempt to shut it down? Oh, that would be the Republican one, which has had the gall to stick it to Veterans for years. Guess who has been trying to treat millions of Veterans while the Republican-controlled Congress shuts down the government and refuses to pass adequate funding bills? The Obama Administration, of course.

You don't get to break the American military and ruin several countries and then come back a half a decade later and hope people forgot everything you damaged, broke, and mismanaged because of your incompetence and stupidity. The mere fact that Gordon writes for Fox News speaks volumes to the impossibility of giving anyone who worked for the Bush Administration a decent job in the real world.

I'll say this for our Kenyan-born black Mooslim Prezuhdent--at least he figured out that killing them with drones in their beds was better than sending them to Gitmo in a diaper.

This is the perfect example of jackassery--any Bush Administration official who criticizes how we are caring for Veterans should shut the hell up and pray that the amnesia of the American people continues well into the future.
on May 23, 2014
Email ThisBlogThis!Share to TwitterShare to FacebookShare to Pinterest
Labels: Bullshit, Commentary, Ethics, History, Media, News, Opinion, Terrorism, War