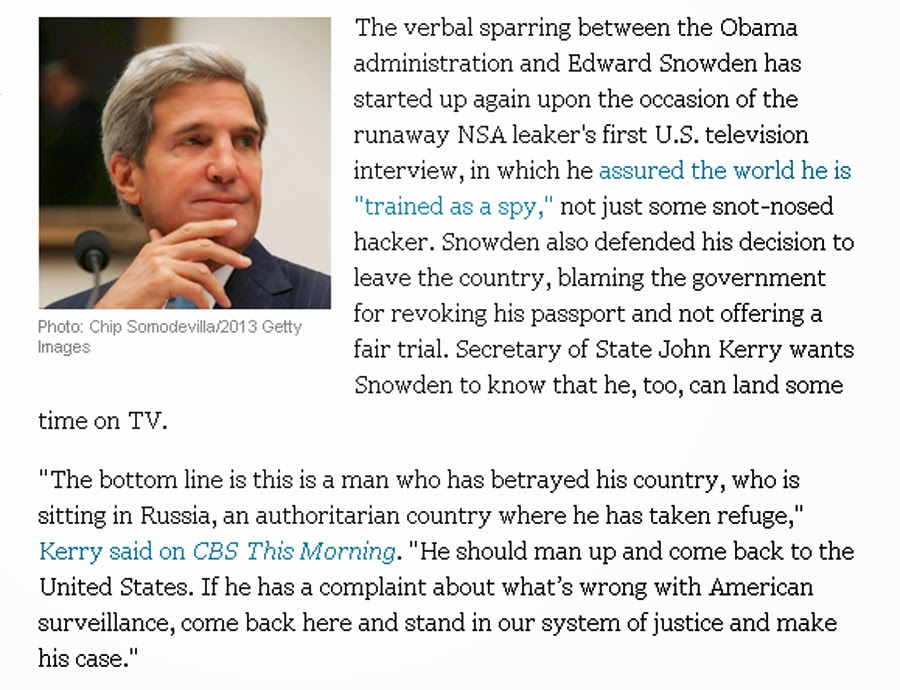 The fact that runs counter to everything that has been said about Edward Snowden is this one--he's not dead. No one has assassinated him. No one has shot him behind the ear. No one has given him poison. He's alive and flush with cash, somewhere in Mother Russia.

Secretary of State Kerry is absolutely right--Snowden should "man up" and face American justice. If his contention is that the American people need to know what their government is doing, his efforts should include making everything about the rule of law and not simply about the leaking and bragging he has done so far.

The problem is, Snowden knows that he likely stole military secrets and gave them to foreign governments in exchange for money, access, or security. He knows he successfully conned others into believing he actually cared about privacy because that is the veil he decided to hide behind. But his most recent interview betrays all of that--he was someone who wanted to BE SOMEONE rather than just do something. He has inflated his resume in order to improve his standing with his foreign handlers. That's what megalomaniacs prefer, especially on their Twitter feeds.

Clearly, there have been doubts as to his ability. Deception? Sure. He is very good at lying to people. Everything else? Not so much for this systems administrator gone rogue. It is quite common for people to travel under some kind of cover or with some measure of identity protection when they work for the United States government. That's not spying. That's force protection.

Snowden remains the greatest fraud of the decade so far.
on May 28, 2014