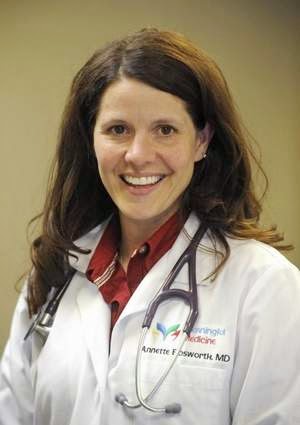 Somewhere out on the prairie, of which I am familiar, is a doctor who is fighting Obamacare. Her name is Dr. Annette Bosworth and she is your garden variety conservative Republican. She was kind enough to send me an E-mail, begging for money.

Here is what she had to say:

This is my first run for political office. I am a doctor, not a career politician, but I just couldn’t sit on the sidelines and watch what is happening to our great nation any longer.

I have always stood up for what I believe in. The first time I stood up to a bully I was 7 years old.

Today, the biggest bully I see is the federal government. I grew up on a working farm in Plankinton, South Dakota. I am a doctor who works with the elderly and the poor. The clinic I own is a small business. In every area of work and life, there is just too much government interference.

Being a doctor, I understand how unfair and harmful Obamacare really is -- and I have vowed to repeal every single word of it. I also pledge to cut taxes, defend the second amendment, and to protect the unborn.

If you're going to run for political office in the Dakotas, you pretty much have to be pro-life to the gills, so I understand her position on that issue. But, as a doctor who serves the poor and the elderly (who are often one and the same), why is Obamacare such an evil thing to her? The elderly are able to afford health care under Medicare, and Obamacare expands Medicare; if you're unable to find a job that pays enough or offers health care, you have a better chance of affording it under Obamacare in most places; that's not hyperbole--it's a fact that a medical doctor should understand.

But wait--it gets better. Why is Doctor Bosworth ignorant of the most important fact of all--they don't even HAVE Obamacare in South Dakota?
Boggles the mind, doesn't it? Here she is, begging for money to fight something her constituents can't even get.

Wal-Mart is much, much more responsible for the plight of the people she claims to want to help. Wal-Mart offers them low-paying, stressful jobs that do not provide affordable, comprehensive medical coverage; in fact, working for Wal-Mart usually means getting your hours cut so that the company can deny you health care coverage. Just once I'd like to see a conservative Republican rail against these practices and vow to do something. If you want to get people off welfare, and reduce the amount of money that the government has to pay out in benefits, why wouldn't you attack a company that is actively screwing everyone?

Doctor Bosworth is absolutely suffering, and if she loses her practice, her only hope for affordable health care coverage is the Obamacare that people like her in her state--which is run by her political party--can't get:

In documents filed with the Senate Ethics Committee, Bosworth reported that at some point since the beginning of 2012, she had two mortgages worth $250,000 to $500,000. She also reported owning four homes in Hartford — but at least three of them entered foreclosure proceedings in Minnehaha County this year.

In addition, Bosworth reported having a business line of credit worth $500,000 to $1 million. She runs a medical clinic in southern Sioux Falls, though at least one employee has sued Bosworth alleging unpaid wages.

That business is worth less than $15,000, Bosworth said in her report, and produced no income.

Her only reported sources of income during the past year were three contracts — $11,500 with the state of South Dakota, $1,200 with Volunteers of America and $4,800 with the University of South Dakota School of Medicine.

Bosworth did not report any income by her husband, Chad Haber. Candidates must report sources from which their spouses earned at least $1,000.

Her only other assets were four checking accounts.

Why is she running from the facts of her own situation? Republicans in Congress have done nothing to help people like her--professionals who are struggling to run small businesses in states that are run almost entirely by Republicans. They have screwed their own citizens because they have an ideological problem with being decent and consistent. They'll lecture everyone all day long on what it means to be a Christian but when the rubber hits the road, screw you--I got mine becomes their watchword.

I mean, holy cow, lady. You're broke. I mean, broker than broke. You're a medical doctor and you can't even pay wages to your own employees, who, of course, can't get Obamacare to cover the fact that you can't pay them for their work. The end result of this is that your inability to pay them their wages means they will have to collect unemployment and welfare benefits--congratulations! And now you're going to bring your sterling business acumen and command of the issues to the United States Senate?

One of this country's problems is this--people like Dr. Annette Bosworth win too many elections. They flat-out tell people exactly how they're going to work against their economic interests and then they go out and win those elections going away.
on May 07, 2014