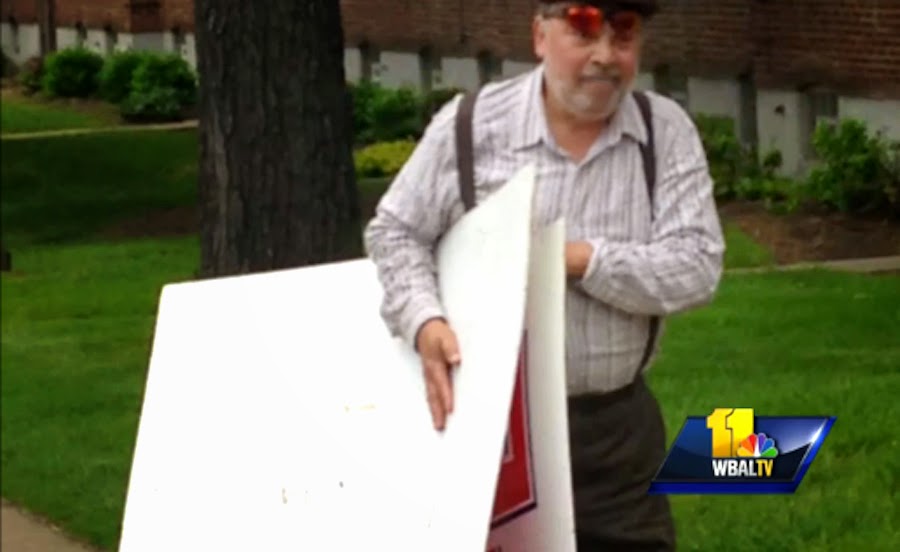 The man you see in the still video image above has been caught on video stealing campaign signs:

Baltimore County police are investigating the destruction of campaign signs in Towson that belong to a state senator.

Officers were dispatched to the 8700 block of Loch Bend Drive on Saturday for a destruction of property call.

The caller, identified as the campaign treasurer for state Sen. James Brochin, told police three people were taking down four 8-foot by 4-foot "Brochin for Senate" signs from a commercial lawn at Loch Bend Drive and East Joppa Road. Brochin is a Democrat running for re-election in Baltimore County's 42nd District.

"It's straight out of middle school," Brochin said. "The fact that my opponent is taking my signs down while I'm doing this rather than getting out to voters and talking to voters is a problem. I'm disappointed. It's sad. It's desperate, but the thing I have always tried to do is go one-on-one to the voter and talk to the voter about public policy."

Unlucky in life, unlucky in crime, and famous for doing something stupid. What a shame.

The really sad part of all of this is that campaign signs are next to useless and don't influence voters or achieve much of anything at all. They may increase name recognition but only in cases where there are voters who are actually going to vote for the person whose name they see in their neighborhood the most.
Know anyone like that? Didn't think so.
on May 12, 2014