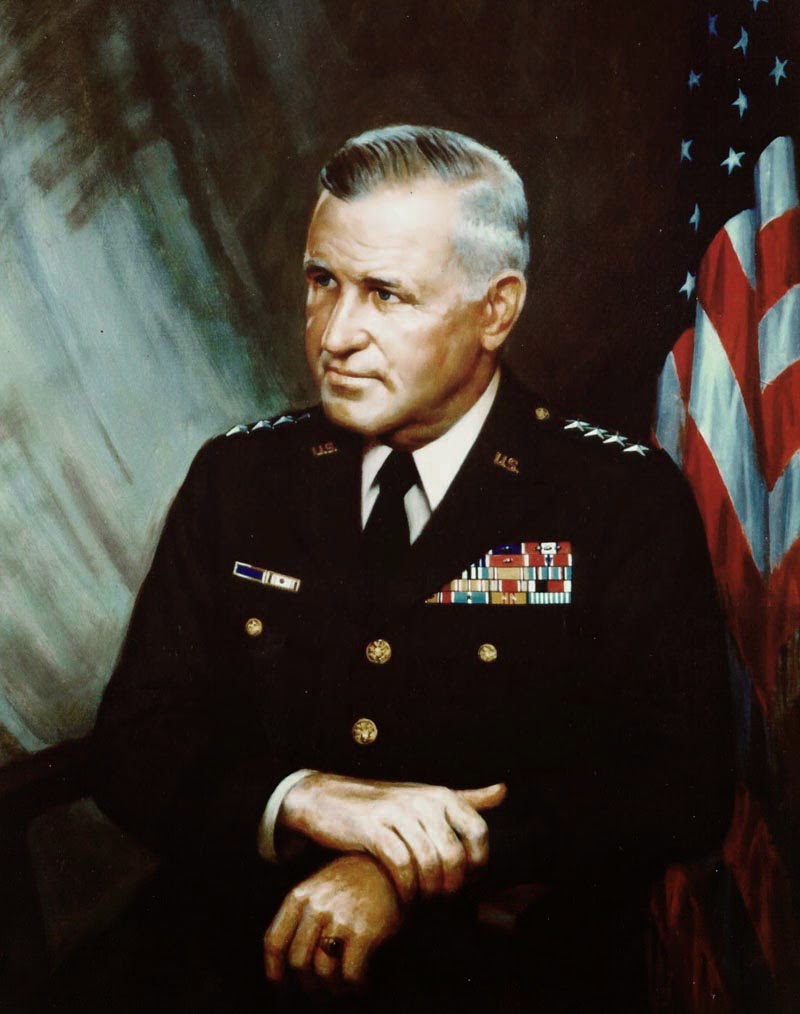 The gentleman depicted above is General Creighton Abrams. He was the general brought into Vietnam at the height of the war to replace General William Westmoreland.

Abrams walked into what was, at that point, a dispirited disaster and a sham of epic proportions. The delusional daily briefings from Westmoreland's staff were replaced by an attempt by Abrams to get to the heart of the matter as quickly as possible. He conducted his briefings efficiently and asked only for clear, supportable evidence.

This was how he waged war. It was learned as a commander in World War II and it was relevant when he found himself fighting exactly the opposite kind of war in Veitnam. For as long as he could, he instructed his subordinates to give him facts instead of inflated body counts.

Week after week and month after month, Abrams sought to educate his commanders. 'Our people have got to realize what this war is about,' he stressed. 'It isn't that you lay around in your base camp waiting for somebody to sight a division marching down the road, and then you sally forth and take the division on. This war is a far more complex thing than that.' As Abrams told Joint Chiefs of Staff Chairman General Earle Wheeler, it's the people — 'That's what both sides are struggling for.'

Abrams continued: 'On our side, instead of talking about offensives, we've got to put a lot of effort up there so that pacification continues to march and continues to consolidate. That's the nature of the beast! Instead of toying around about whether you ought to move another brigade of the 4th Division, something like that. That's not the real answer!

'This war, if you're really going to understand it and really get with it — he runs it, the enemy runs it, at about five or six levels,' said Abrams. 'The levels are his infrastructure, guerrilla structure, local force structure, main force structure, his political effort, his propaganda effort. In order to play in that game effectively, you've got to operate at all those levels yourself.'

Emphasizing the need to work against the entirety of the enemy system, Abrams told his commanders: 'What we've been doing is sort of on a treadmill. We have focused on these main units, and they're always getting ready to hit Saigon or Tay Ninh, whatever it is, Ban Me Thuot — and so we go after that and we're whacking them with B-52s, tacair and artillery, and dumping in on them and piling on and that sort of thing. And the history of that is that we go ahead and mash it all up, but then he sends a lot more guys down and builds it back up again and we mash it all up again and just — you know, cause a lot of casualties and so on. Now the way to put a stop to it, the way to get off the treadmill, is to go after this other part which always seems to survive….This is the way to run the war! Our war!'

Abrams taught by example and this changed the tenor and the tone of the briefings and brought brutally honest assessments to bear on the reality of what the U.S. military faced in Vietnam.

At MACV they had a weekly meeting of senior staff, held Saturday mornings. Once a month senior commanders from the field would also attend. This they called a WIEU (pronounced “woo”), short for Weekly Intelligence Estimate Update. It was far more than the name implied. Abrams used the WIEU as a forum, a place to think out loud, to impress the force of his personality on his staff and subordinate commanders, to put the pressure on, to entertain, bond, encourage, buck up. He gave and drew strength in it. It was a theater, and he was the star player for an audience that was also the supporting cast. They loved it. Said one regular attendee, General Abrams’s “eruptions” were always the best part.

There was no political will in America to continue the war--not by a long shot. But the efforts of Abrams are largely unknown. For many, Vietnam ended with Tet. For Abrams, Tet was the beginning of the destruction of the Viet Cong as an effective fighting force and the gradual reduction of the infiltration lines. The illegal bombings of various countries was, in fact, a war crime. And yet, the bombings slowed the men and material being used to destabilize the South Vietnamese government.

Right at the moment where Abrams had reversed the tactical situation in Vietnam--and not the strategic one--the resources he needed to fight the war were withdrawn by the Nixon Administration. By 1972, Abrams had a situation where areas of South Vietnam that were impassable and held by the enemy were regularly traversed by Americans who enjoyed access to cleared, held, and pacified areas. He had completely turned the tide only to have his victory taken from him. Tactically, Vietnam was an American military success story under Abrams. Strategically, the war was never winnable.

Abrams taught the military two lessons. One, tell the goddamned truth about what's happening and deal with it. And, two, never go to war unless the American people are willing to go and fight (this gave us the National Guard in a form we know today). What's more, he was not a classic salesman and did not "sell" the reality of the turnaround that he was responsible for. He died before his version of events could be told to the public. But he did not die before those two lessons could be learned and taught, albeit inconsistently, to the U.S. Army. The institutional awareness of Vietnam has always been spotty, at best, but the Army especially is not short of academics and men of letters. Nor was it ever short of men who insisted on learning something after being kicked in the ass again and again and again.

Everything Abrams accomplished was forgotten in Afghanistan:

But the Joint Chiefs of Staff report stands out for two reasons: It makes clear that some senior officers recognize that a major military incursion can be disastrously undermined by an overriding, nonmilitary factor, namely an illicit national economy. And it acknowledges that the U.S. military itself bears much blame for Afghanistan’s enduring mess, due to its poor understanding of Afghan traditions, mismanagement of key reform efforts, and weak oversight of its local partners. The report displays “a critical awareness and candor often missing from official documents,” says Sopko, the special inspector general.

The war in Afghanistan never found an Abrams. Instead, we had a veritable clown car full of corporate board sitting generals who failed, utterly, to tell the truth about what was going on and to instill a policy of actually learning local customs before trying to root out the Taliban.

It's not enough to say that the counterinsurgency or "COIN" mentality and approach utterly failed in Afghanistan. It failed so bad that we still don't have a full accounting as to what we could possibly do to make things work in the favor of our interests. No, we're still deluded by our disbelief in truthful assessments to even begin to sort out what went wrong and why it went wrong. We are not being honest with ourselves--all of the American people failed to understand and stop the war when the military and the civilian leadership shit the bed and turned it into a rolling clusterfuck.
on May 06, 2014