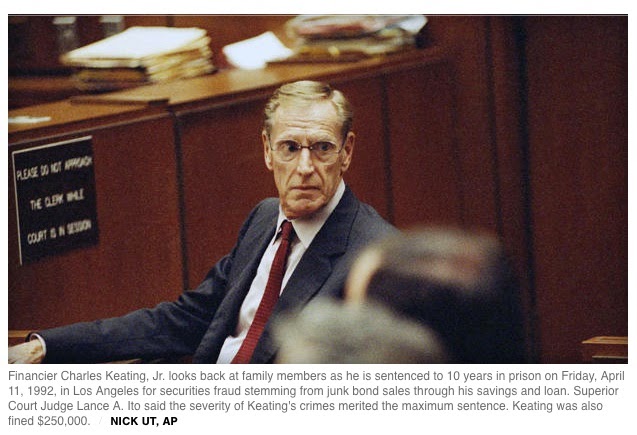 Charles Keating was a notorious figure in the late 1980s and early 1990s. He's dead now, and I wonder if everyone got their money back. No?

His name was synonymous with greed and excess. The Eighties were the decade of such things, and Keating was one of the drivers of the bus that went over the cliff when the bill came due.

This, by the way, is bullshit:

Our working media gave him a pass and let him drift off into obscurity. He left a trail of slime through the courts, using lawyers to duck accountability for at least a decade after being exposed as a fraud. The scandal that broke around the so-called "Keating Five" should have ended the corrupt and vainglorious warmongering of one Senator John McCain, but it didn't and he was given the biggest mulligan anyone in politics ever got. He was also given a major pass by the amnesiac media when he ran for President and by an establishment that simply didn't give a shit about accountability anymore.
on April 02, 2014