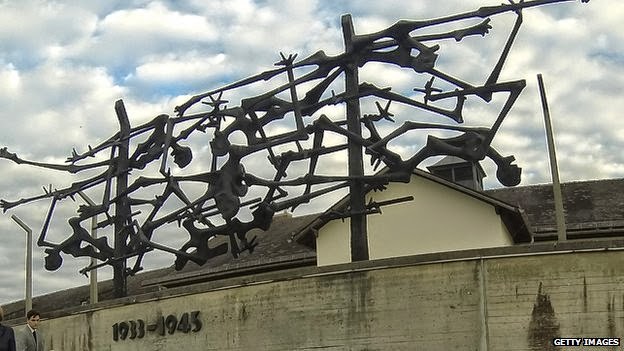 An American student attending a German high school says she was shocked that her fellow students laughed and joked during a class lesson about the Holocaust.

"The boys laughed uncontrollably, ignoring our teacher's attempts to stop them, while looking at pictures of starving concentration camp victims," Sophie Roth-Douquet writes in USA Today.

She says "things got worse" during a field trip to the concentration camp at Dachau, when she overheard a classmate joke about a sculpture of men caught in barbed wire.

My own experience is different from that of Miss Roth-Douquet, who I did not meet when I lived in Stuttgart. She is one of many Americans who attends a German school in the surrounding area and does not go to the American DODDS high school located on Patch Barracks.

I can comment on my own experience, however. Every year, German high school students are bused to Dachau and required to visit the camp. When you arrive at Dachau, which is north of Munich, you drive down the same kind of German main roads that exist everywhere. It is not a site that is surrounded by blankness and by fields. It is just right there, in the town of Dachau. 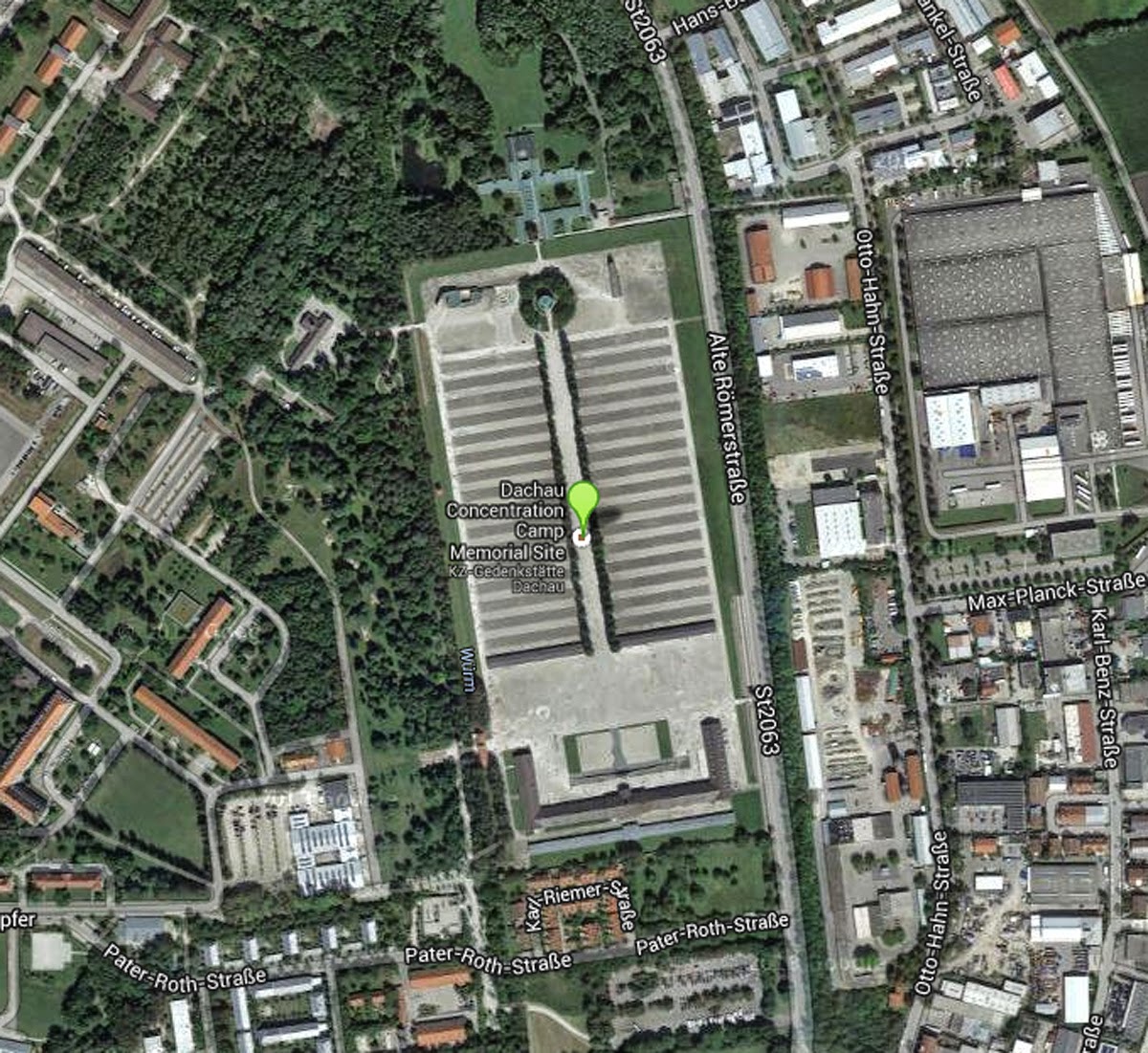 There are stores, gas stations, and whatever else on Alte Romerstrasse; the buildings that once housed the SS troops outside of the camp are now home to the Bavarian Riot Police.\. When you turn left and enter the large parking lot for the Dachau camp, you are struck by the fact that it is not desolate or horrible around the old walls of the camp--far from it.

There are businesses and homes where people actually live that border it and surround it. It is a prosperous place where people can shop and live. You leave the parking lot, you go to the visitors center, and then you enter the camp complex. It is no different than visiting a castle or an amusement park. You can literally go across the street and buy furniture. The city around Dachau simply rebuilt itself and went on living.

I cannot show you anything from Google's point of view about Dachau; this is as close as Google got with their attempt to drive around and take pictures: 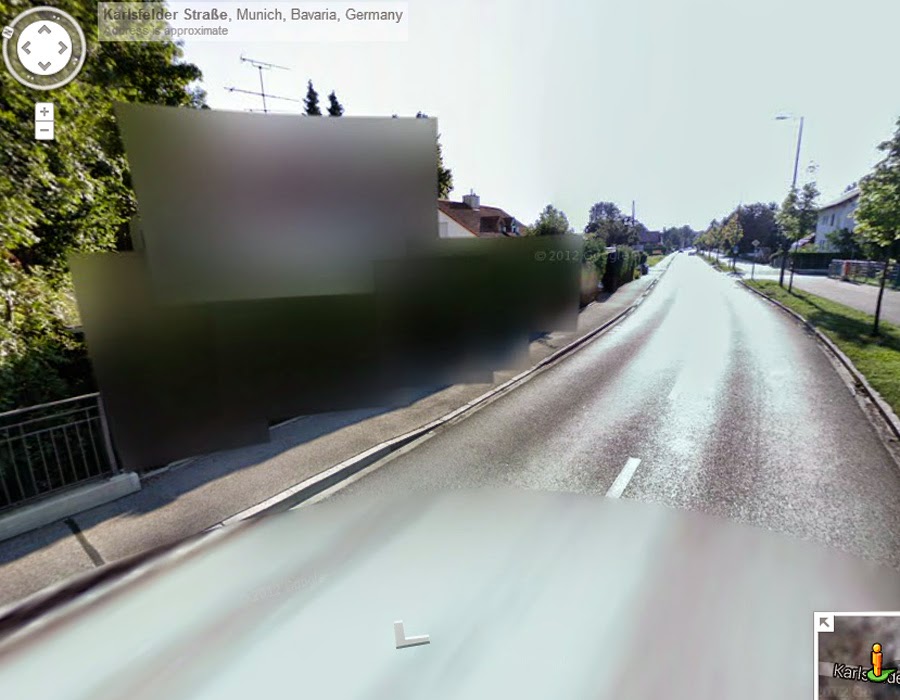 So, Google's Street View can't show you what I saw around Dachau. And note the fact that the homes are blurred out--that's a German preference for privacy that is ingrained. For some reason, the area around Dachau wasn't covered by Google's drive-by.

The Germans are far removed from the war; what few grandfathers there are who survived are likely great-grandfathers and have mostly died off. Some wag put this on the gate: 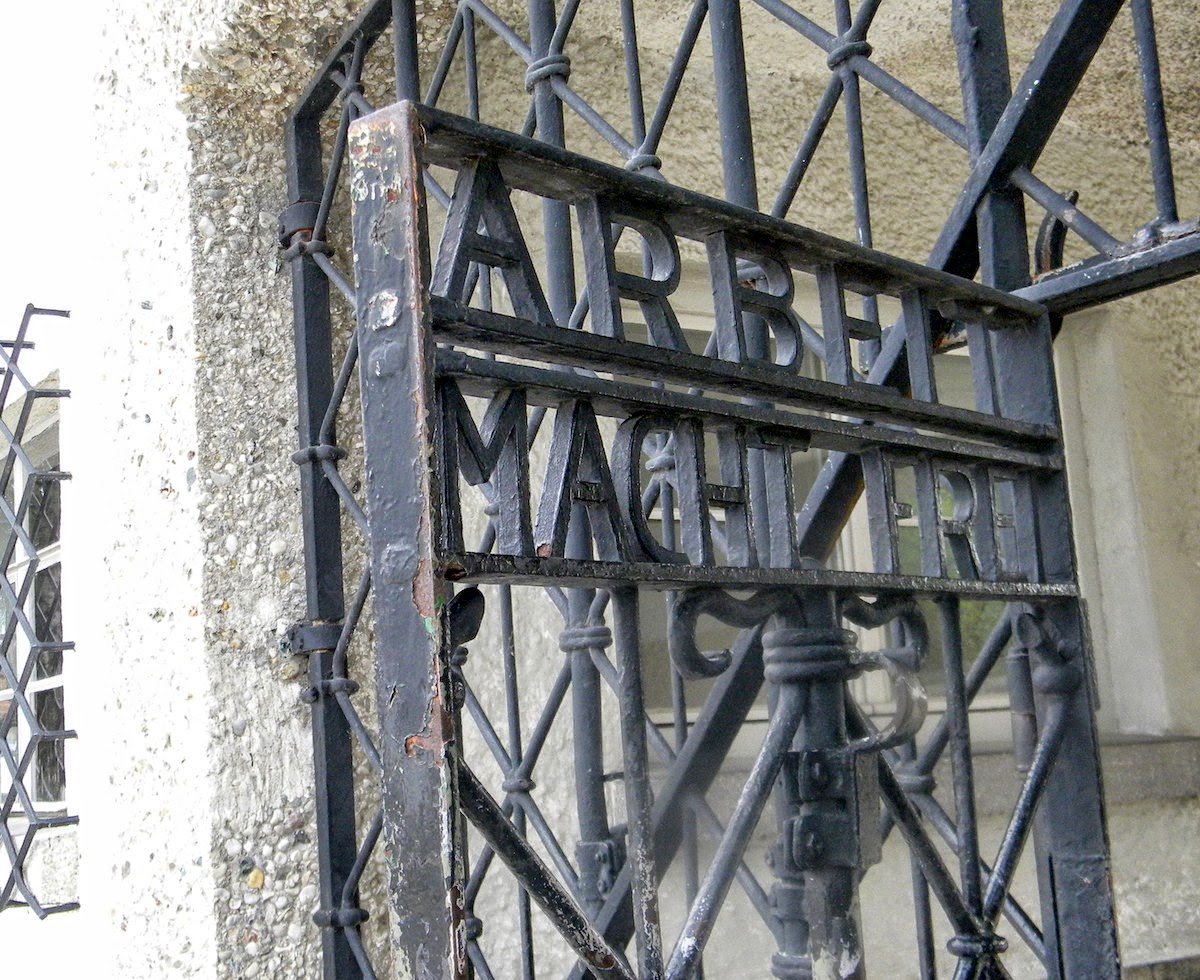 To stand before such evil is to wonder what kind of society could allow such things.

Well, German society, for one. The Germans put their elderly into homes like we do; there are multi-generational families under one roof in some circumstances, but, by and large, they occupy retirement homes. The largest building project in our village was a brand new retirement home, and it was finished just before we left. They removed the rubble, and they removed the worst of the worst, and then they quietly removed the traces of the war and now the last vestiges--the old people--are removed from view as well. Life is easier when you can sanitize and remove the things that upset a people. The Germans cannot remove Dachau so they have build their town around it and they have roads that go by it and they let the trees grow around the camp. 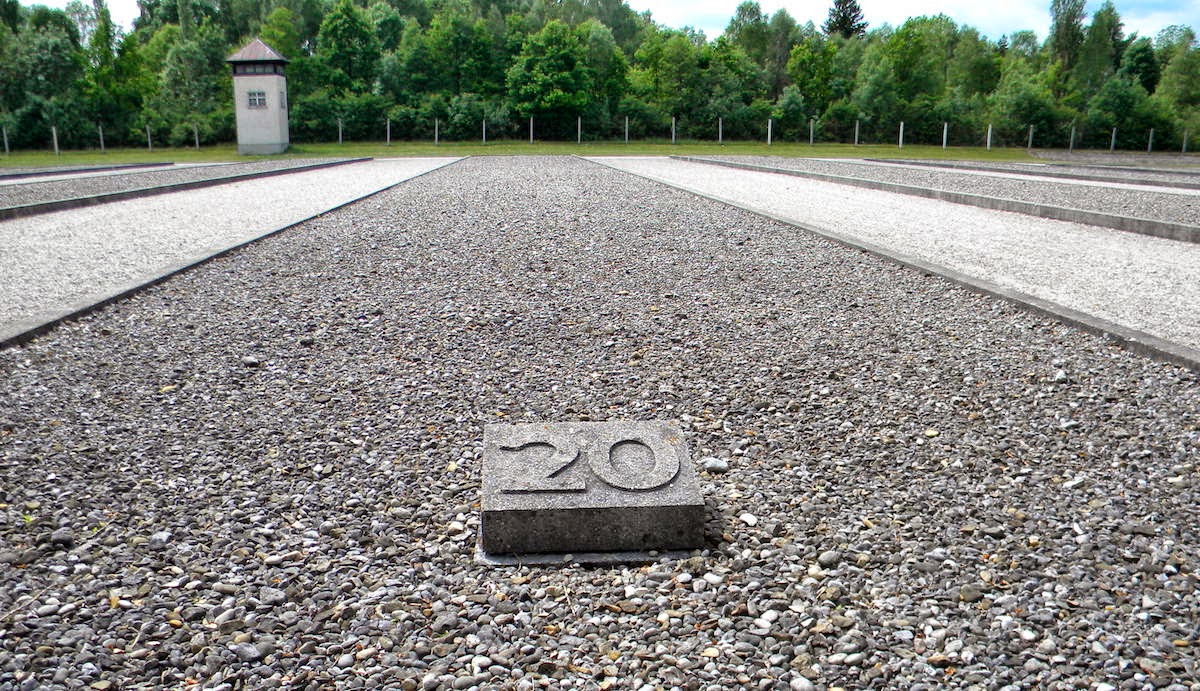 From this vantage point, you see the marker for building 20, which housed hundreds of prisoners in a confined space. The tower to the left was staffed with riflemen and machine gunners. The fence is right there. And the trees keep out the view.
Immaturity is a trait you'll find practically anywhere, so I'm not surprised that Miss Roth-Douquet found it in her high school. The douchebaggery of your typical German teenager isn't something that wouldn't be recognized in a kid from Glasgow or Baltimore. If she had been in school with teenagers from England or France or Sweden, their reactions to the horrors would have probably been the same--nervous jokes and stilted laughter. The difference is, these German teenagers failed to remember that they are the offspring of the perpetrators and don't really have the right to laugh at starved human beings. Really, no one does. But teenagers are going to laugh at those sorts of things. When you're a lout from Manchester, it's one thing. When you're from Sindelfingen, it's entirely something else.
The whole of Germany has been scrubbed of the war. You might find a memorial here and there but the after effects are mostly gone in the prosperous areas like Southern Germany. I have no idea what the old Eastern part of Germany looks like. They celebrate Medieval times and Oktoberfest. They will even celebrate May Day, and I'm certain that the May Poles going up are just like the ones from last year. The only place where you can count on some sort of memorial is when you visit foreign countries where large numbers of German soldiers are buried. Many German teenagers travel to these places and work to clean and maintain those cemeteries.

Here are my photos of Dachau: 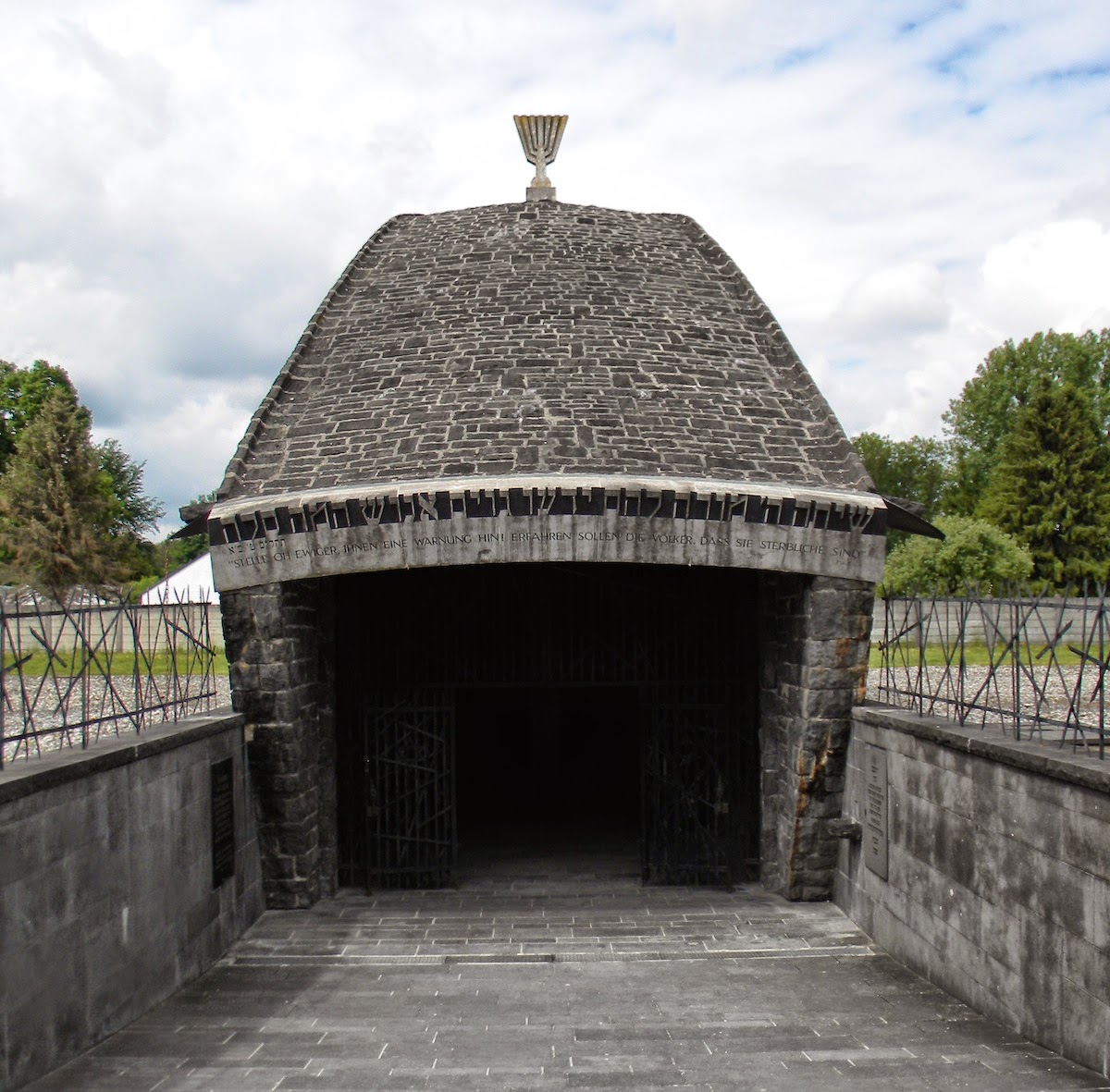 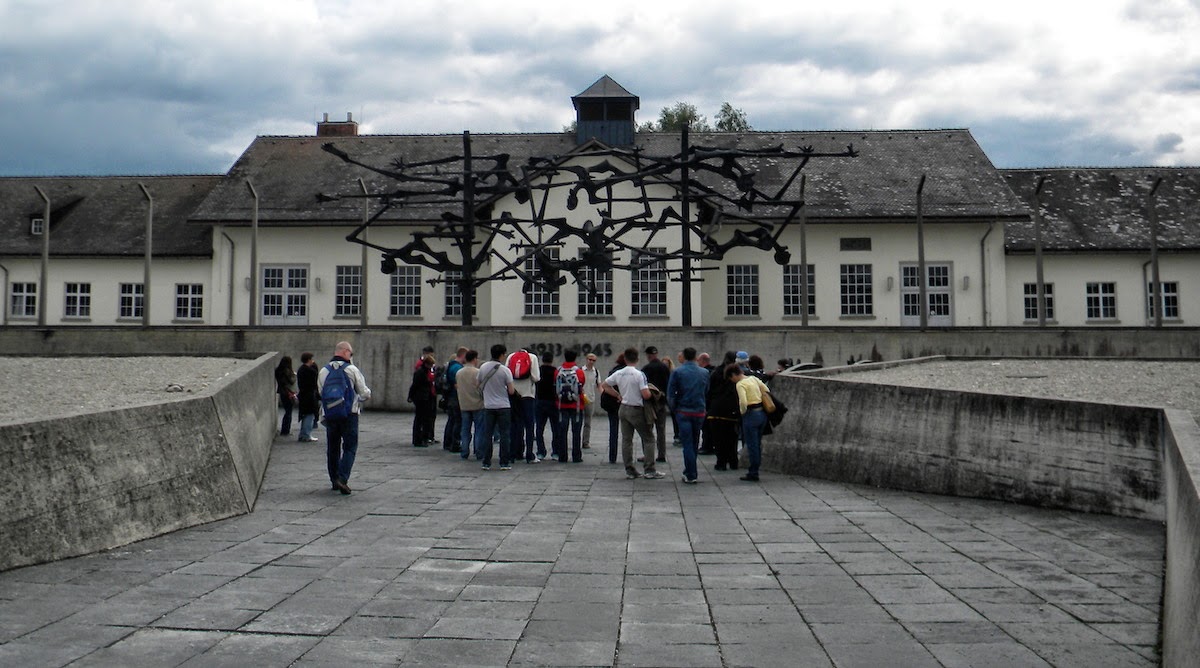 Dachau itself is meticulously preserved and protected. The site is stark and sobering. The outlines of the blockhouses are clearly visible, giving the place a massive scale. The memorial aspects of the site are appropriate and reverential, and the information center will haunt you with images of humanity, extinguished in a senseless need for order and dominance. It is the most ghastly, horrible place you will ever visit.

When I was there, scores of German teenagers walked around, seeing the exhibits and walking on the pathway used by prisoners who were force-marched away from the camp in order to hide them. None of them laughed or carried on; they were well-behaved that day.
There is a plaque that describes the liberation of the camp by an American Army division. 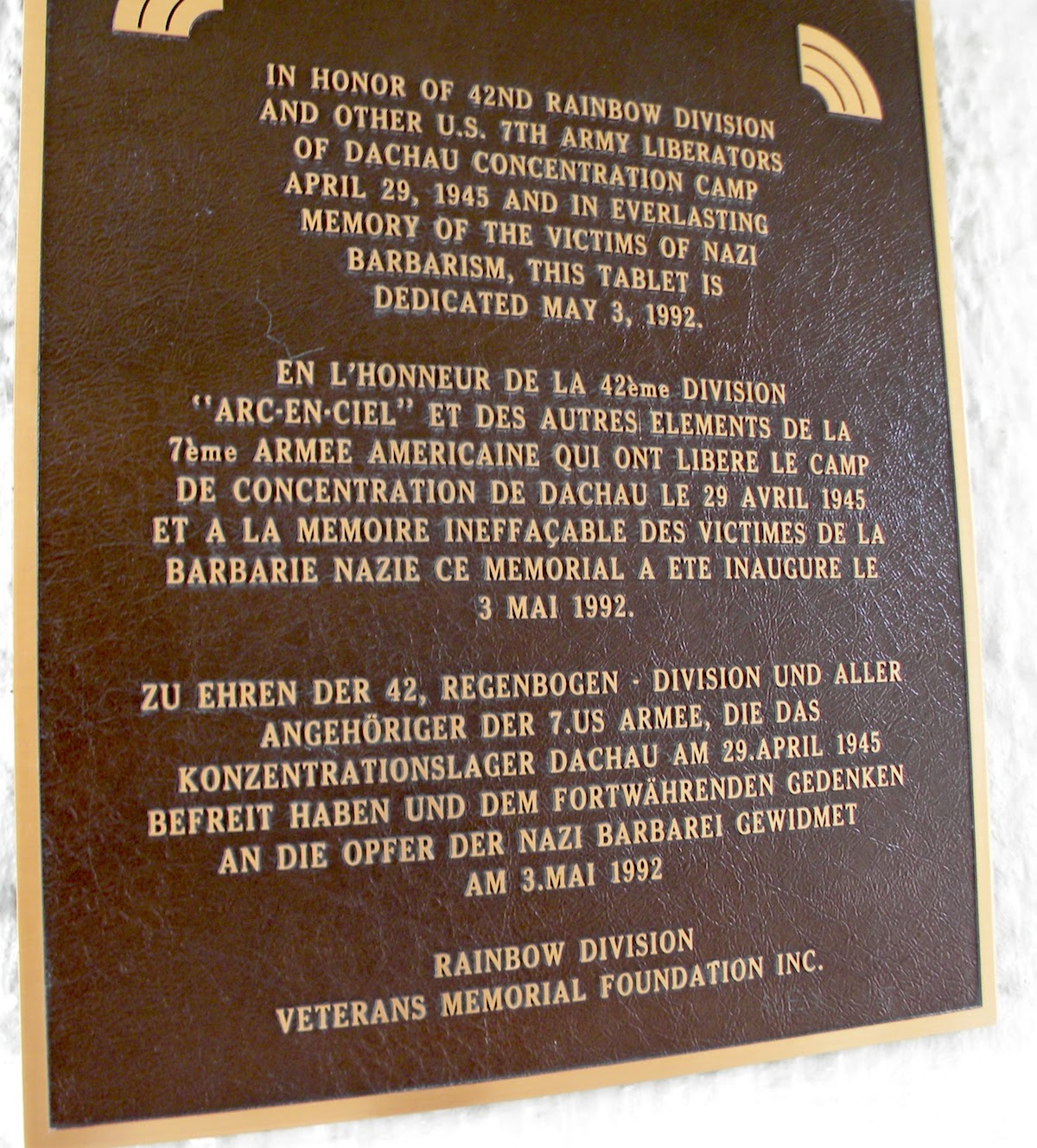 It is proof that you can stand in a terrible place and be proud to be an American.
And so, Miss Roth-Douquet is exactly right--these idiot German teenagers should be more respectful. That they are not is proof we've forgotten our history, but we do it again and again and again.
on April 25, 2014
Email ThisBlogThis!Share to TwitterShare to FacebookShare to Pinterest
Labels: Culture, Douchebaggery, Editorial, Germany, History, Humanities, Society, Travel, War