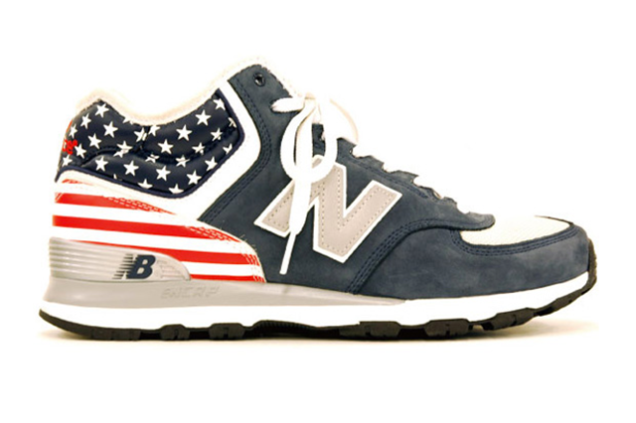 ...there's only one firm that currently comes anywhere close to making a shoe entirely in America: New Balance. (And even they concede that "Made in the USA" doesn't mean what you think it means: "1 out of every 4 pairs of shoes we sold in the USA was made or assembled here. Where domestic value is at least 70%, we label our shoes "'Made in the USA.'")

In other words, the military just made a competitive bidding process into a no-bid, one-shoe-fits-all process. All to support "America."

Funny thing is, the military didn't want to do this, in part because "Narrowing the recruit's choice to one or two manufacturers, as they select a shoe for rigorous initial entry training will, 'limit the choices available and may result in more injuries,'" according to a DOD spokesman just two months ago. But politics interceded on New Balance's behalf, again.

If you've been in the military for any amount of time, you know New Balance has long gnashed its teeth on the ample gubmint teat. In addition to the footwear allowance, military recruits (and officer candidates) get issued go-fasters, running suits, and other gear that more often than not comes from the Massachusetts-based sneaker company.

If you've been in the military, the last place you're going to go for information is Gawker, but I digress.
When you go to basic training, there is nothing but confusion and chaos. This is done on purpose in order to weed out panicky, punchy, violent people who cannot conform to military standards. The shoes on your feet don't matter because you're not there to perform at the peak of personal comfort and fitness--you're there because SHIT! Run! OK, now get some food and go to bed and SHIT! do it all over again. This all happens in the back woods of America, and you'll be tired for as long as you can stand it and you'll eat weird food and be on your feet a lot. Boredom is your single greatest enemy in basic training. So, leave it to people who have never been there to get it wrong.

The fact that New Balance is a government contractor doesn't matter--all government contractors are thieving bastards. You must admire them for their cleverness and ignore their ability to screw up your life, otherwise it will just bother you.
If you're a privileged rich person, basic training is the last place you are going to want to be with your $300 running shoes because they'll get wrecked fast. You need a cheap-assed pair of shoes you never want to see again when the 9 weeks or whatever it is are over. You're going to DX your uniforms and boots the first chance you get anyway--that's why you are expected to trash and wear out that basic training gear.
You don't need anything more than a shitty pair of $35 running shoes. If you go with cross training shoes, all the better. But they could be anything because the boots you wear all day are going to change your feet dramatically. When you get to AIT, you're going to throw away the shitty stuff and buy nice shoes and all that when life settles into more of a routine--that's about when the shock of wearing leather boots changes over to more of a military lifestyle. There is a routine at basic training and it's called SHIT! go stand there for an hour and then RUN! You needed to be there before you could be here and SHIT! those shoes don't matter, private. Because they don't.
The biggest shock to your system isn't going to be centered around a cheap pair of running shoes--it is going to be the boots they give you and the wool socks.
Running shoes are a scam perpetrated by greedy companies on the gullible.
It does not matter what kind of shoe you wear on your feet. Buy a $35 pair and run in them. What matters is that you do not use them past their wear-out point; whether that is 300 miles or six weeks is your choice. No matter what brand or style or cost, a running shoe that is worn out will damage your lower body.
In fact, try running without shoes and see if that works for you.
on April 28, 2014