The Cheney Family Has No Dignity 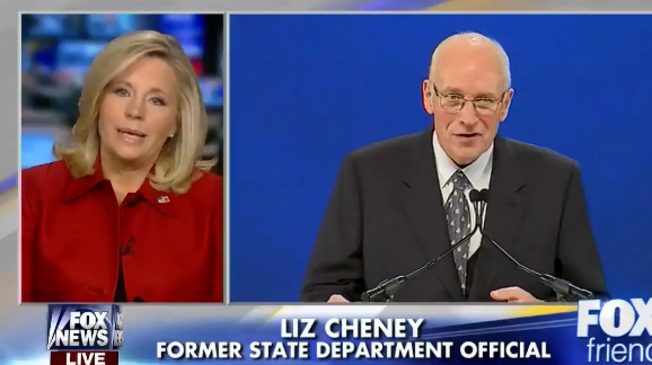 It would be difficult to imagine that any other family in American politics would be so quick to stoop so low:

Liz Cheney has been fiercely defending her father, former Vice President Dick Cheney (R), over reports on the Senate's investigation into CIA torture under the Bush-Cheney administration.

On Sunday, House Minority Leader Nancy Pelosi (D-CA) said that Dick Cheney "set a tone and an attitude for the CIA" and that he was "proud" of his involvement in CIA's decision to use enhanced interrogation techniques.

On Tuesday morning, Liz Cheney hit back at Pelosi for her comments.

"Frankly, Mrs. Pelosi is somebody who was briefed on the program," Cheney said on "Fox and Friends," according to Mediaite. "She forgot she was briefed on the program, later had to admit it. And I have to say that when I heard those comments yesterday, I was reminded of something that Margaret Thatcher once said about one of her political opponents. Mrs. Pelosi’s problems is that her spine doesn’t seem to reach her brain."

The Cheney family is entirely without dignity. All kidding aside about Liz Cheney's ridiculous attempt to carpet-bag her way into a Senate seat in her father's home state, there is something unseemly about using a daughter with no accomplishments of her own to smear a leading member of the opposing political party. It smacks of desperation and a lack of knowing who is, and who is not, relevant.

Rand Paul has eviscerated the Cheney legacy in recent days but, because he actually has a future, the Cheneys are holding back on attacking him as fully and completely. They will attack him, of course, but they are calculating the damage done to Pelosi with their expert Machiavellian system of settling scores.  Give it a little while, and these voracious, howling rejects from days of glory past will come out of the woodwork looking for a carcass of their own.
on April 08, 2014