Life at Fort Hood is Not Easy 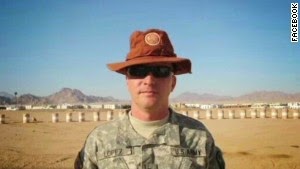 Spc. Ivan Lopez vented about a range of subjects on Facebook before his shooting rampage at Fort Hood in Texas, including his outrage at Adam Lanza's mass school shooting in Connecticut.

He wrote of experiencing overpowering fear after an insurgent attack in Iraq and the hatred that consumed him after getting "robbed."

Lopez took his own .45-caliber handgun onto the sprawling post Wednesday and killed three people and wounded 16 more before taking his own life, according to authorities.

We aren't exactly certain what he meant by "robbed" and we should not downplay the fear he had while deployed to Iraq. His fear of being attacked was never dealt with and he was never properly counseled by his leadership or the medical authorities. But what people don't really understand is that life at Fort Hood for regular Army soldiers is extremely difficult. It is not a quality of life assignment. By design, it is a tough assignment to a tactical unit, and with it comes a grueling training calendar and a whole lot of time spent in motor pools and in the field.

This is the Army that people can either adapt to, and thrive in, or they don't. The unit that Lopez belonged to likely has a system. Show up unannounced, looking for a leave form, and it's entirely reasonable to be turned away. Most of the comments I've seen try to play up the angle that this was chickenshit. Nope.

The days on Fort Hood are long days. Someone who hasn't been in the real Army--and that would be me--has to adapt to a training calendar that can best be described as relentless. Due to a decade of war, the brigades stationed at Fort Hood are seasoned with experienced combat veterans but, to date, only two of them have shot up their fellow solders. One was a shitbag, never-been-anywhere Major who is facing the death penalty and the other is Lopez, a Specialist who snapped because he couldn't get a leave form when he wanted one. He carried out his own death penalty.

Then there was the female who ranted and raved to the media about how bad it was on Fort Hood. I don't have a link to the video, but if she isn't on her way out of uniform tomorrow, she will be before the month is out. But yes, it is bad on Fort Hood. It's bad in Germany--services have been cut to the bone. It is bad at Fort Stewart in Savannah, Georgia. It's bad in South Korea. It's bad in Alaska. It's bad at Fort Riley, Kansas. It's terrible at Fort Gordon, Georgia, if only because it's a base with a school and whatever else. It's bad at Fort Drum. In other words, the condition of bad is endemic to the entire Army. It is a difficult profession and it requires sacrifice and putting others before your most basic needs and desires. It breaks people.

The war didn't break either of the men who shot their fellow soldiers at Fort Hood. The low standards that allowed them to join and then remain on active duty are the reason why there was violence. Lopez should have been on his way out of the Army; Major Nidal Hasan should never have been allowed to join. Neither man should have been untreated for mental illness and both should have been on medication, in a medical unit, and transitioning to civilian life. Once in that status, their right to purchase and own firearms should have been revoked.

Raise the standards and throw these people out.
on April 06, 2014