John Calipari is a Bullshit Artist 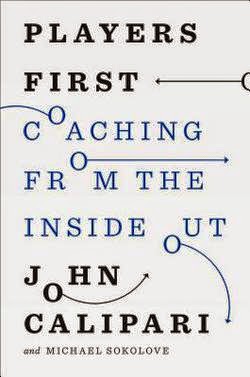 This will make you retch:

"If you are a college basketball fan like I am, you'll understand why I've long admired John Calipari's leadership style. While no coach treasures a win more than John, this terrific book reveals his greater purpose--to lead his young players to better lives, and then challenge them to give back to others." --President William J. Clinton

So much for the character judgment of President Clinton. Wow, big dog. You had to go there?
This is the write-up on Calipari's new book about allowing players to take the fall for--I mean, about how to get the most out of players by putting them first.

In "Players First," John Calipari relates for the first time anywhere his experiences over his first four years coaching the Kentucky Wildcats, college basketball's most fabled program, from the doldrums to a national championship, drawing lessons about leadership, character, and the path to personal and collective victory.

At its core, Calipari's coaching philosophy centers on keeping his focus on the players--what they need to get the best out of themselves and one another. He is beloved by his players for being utterly honest with them and making promises that he always keeps, no matter what. He knows that in this age, they come to Kentucky to prepare for the NBA; every year he gets players who in a previous era would have gone directly into the pros from high school but now have to play college basketball for one year. Calipari has fought against this system, but he has to play within it, and so he does, better than anyone.

In 2005, long before the questions arose over who exactly took Derrick Rose's SAT, there was a break-in at the apartment where several members of the Memphis team lived. According to police reports, the items stolen included $3,600 in fake fur coats, $6,000 worth of shoes, and however many throwback jerseys $2,150 will buy you. It is possible that the players in question amassed this bounty on only what they received for books, tuition, room and board, and fees, or out of the largesse of their respective grandmothers. It is also possible that Maggie Gyllenhaal waits for me around the next corner. Then came that great season that doesn't exist any more, and the scandal, and Calipari was off to Kentucky while Memphis took the NCAA sanctions right in the face.

After what happened at Memphis, there is no way--no way--Calipari should have been able to continue as a coach in the NCAA. Mr. Charles Pierce continues:

But the man is a master at walking between the raindrops. The argument in his defense is, always, that nobody investigating the scandals at UMass and Memphis ever found anything they could pin directly on John Calipari. It was always the players who betrayed his fundamentally naive trust in their integrity, or the shifty characters around the players who induced them to abuse the good nature of a decent chap who's only trying to play by increasingly complex rules. While Calipari knew Memphis was under investigation before he scurried off to Lexington, the NCAA itself has said that Calipari is not "at risk" in its investigation of the Memphis program. His responsibility for knowing what was going on with his players ended at ... well, it's hard to say where it ended because, by the logic used in this defense, it never really began. What was he supposed to do, anyway? How can a poor man stand such times and live?

Calipari is a sleazy bullshit artist and nothing more. If you're going to bitch about steroids in baseball and refs who shave points in the NBA, you cannot ignore the massive history of fraud and cheating that has followed Calipari around like Pig Pen's cloud of dust.

Would you trust your kid to such a man?

The result is an extraordinary leadership challenge: every year Coach Cal gets a handful of eighteen-year-old kids who have been in a bubble for the previous four years at least, filled with hype about their own greatness, and they come to Kentucky feeling sure that they will play for their coach only for seven months before they go on to greater glory. Every year, he has to reinvent his team. After his 2012 NCAA championship, it was particularly dramatic; he lost his first six players in the first round, meaning that someone who couldn't even start for Kentucky was a first-round draft pick.

I guess if you would trust him, that says more about you than it does about him or the corrupt NCAA system that allows him to thrive.

The overall record at Kentucky, and for his career, puts Calipari in the pantheon of the greatest coaches in the history of the game. Bold, funny, and truthful, like Coach Calipari himself, "Players First" is truly the first deep reckoning with the meaning of his experiences and the gifts of insight they offer.

If the pantheon has so many corrupt and vile coaches, why not tear the thing down?

UPDATE: Welcome, Kentucky Fans! Glad you could make it. Sorry about all of the people who agree with this post. There are more people who have given me a +1 on this post than there are rabid Kentucky fans who want to insult my parentage and make references to sexual orientation. Go team!
on April 15, 2014