A Criminal Conspiracy Within the VA Medical System 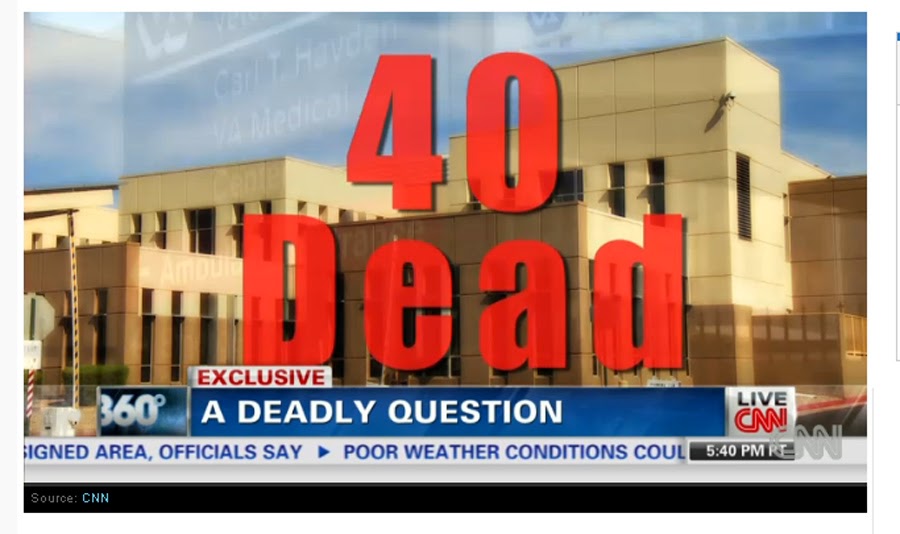 At least 40 U.S. veterans died waiting for appointments at the Phoenix Veterans Affairs Health Care system, many of whom were placed on a secret waiting list.

The secret list was part of an elaborate scheme designed by Veterans Affairs managers in Phoenix who were trying to hide that 1,400 to 1,600 sick veterans were forced to wait months to see a doctor, according to a recently retired top VA doctor and several high-level sources

How hard is it to be accountable for what's going on? If you're the person in charge of the VA hospital, you raise your hand and say, "we're in trouble and we need help." That doesn't mean that VA in Washington D.C. has to fire that person--just the opposite. It means that resources have to be allocated to help keep veterans alive.

Instead, we have a criminal conspiracy to destroy evidence and hide the problem. The cover-up is worse than the crime, right? No, the crime was that forty veterans died because a handful of people put their careers ahead of what was right and let them die.

How much do you want to bet that monetary bonuses have landed in the checking accounts of everyone involved on a regular basis for years? How much would you put down against the chance that the management was paid exorbitant salaries for years while this went on?

Tell me again why Eric Shinseki still has a job. The VA leadership should be flushed completely out of the system and replaced with people who care and who can be accountable. Not just at his level--immediately below it as well. Whoever supervises the VA hospital system should be cleaning out their office right this minute. The VA cannot tolerate a continuation of failure. And it should seek out people who actually deal with and solve problems like adults. Shredding evidence? What is this, Wall Street? No, it's the VA medical system. People die when careerism takes over.
on April 24, 2014