Shake Your Fist at the Bad Man 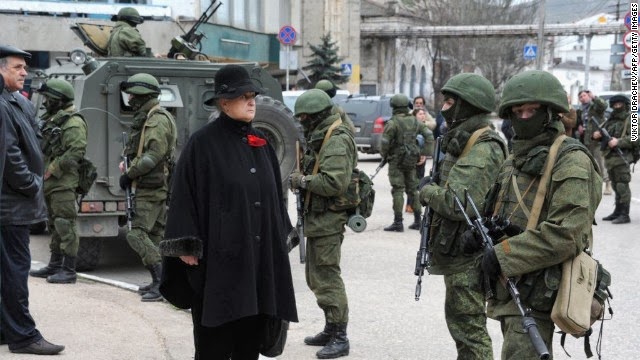 Vladimir Putin is going to take the southeastern part of Ukraine and there isn't anything anyone can do about it:

Russian President Vladimir Putin appears to be dismissing warnings from world leaders to avoid military intervention in Ukraine's Crimean peninsula, even amid growing evidence that pro-Russian forces were already in control of the region.

The rhetoric escalated Saturday night, with U.S. Secretary of State John Kerry condemning what he called "the Russian Federation's invasion and occupation of Ukrainian territory" despite a statement by Russian Prime Minister Dmitry Medvedev that no decision had been made on whether Moscow would dispatch forces.

This all comes down to the ability of the Russian army to seize and hold territory and not face a set piece battle. Is NATO supposed to send troops? Who will they send? A Dutch battalion and a few brigades of French troops? A British support battalion? A German unit will never, ever be sent, no matter what and if they are sent, there's nothing that will stop Putin from setting his forces loose. Will we send an American division? Which one? The one that used to have heavy brigades at the now nearly empty place called Baumholder in Germany? Will we send everyone in Italy? We still have an airborne brigade, right?
There's no one to send and no way to get them there unless they traverse Poland and the Western Ukraine. Once armed NATO troops breach the old border of the Soviet Union, forget about peacekeeping missions. Putin will exhort the nation about a new invasion from the West, led by Americans and Germans and it will be very uncomfortable in any nation where anyone identifies themselves as being Slavic.
Just a thought--what happens if the Balkans blows up? What happens if Putin decides that the Baltic nations have had enough freedom and that he needs their ports and their industries?
Who is going to stop this man? The army we just hollowed out and that the Congress can't find $18 billion dollars to nurse back to any kind of reasonable health? Yes, go ahead and send them. Empty the VA hospitals and ask thousands of Veterans who have been crapped on for the last decade to go.
This is what impotent rage looks like. We can, literally, do nothing except threaten economic sanctions.
on March 02, 2014