The First World Problems of a Privileged Class 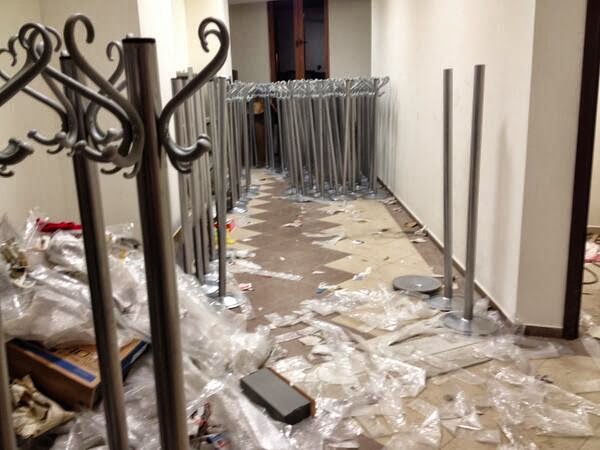 Wait a minute--you mean things are spartan and ramshackle in today's Russia? Really? I am shocked.

While some are calling them first-world problems of Western journalists sent to cover one of the world's greatest events, complaints about unfinished or underprepared hotel rooms in and around the Sochi 2014 Winter Olympics are pouring in online.

In the past 24 hours alone, more than 26,000 tweets have been sent using the hashtag #SochiProblems and the Twitter account@SochiProblems has more than 53,000 followers as it retweets some of the stories and photos.

On Wednesday, International Olympic Committee spokesman Mark Adams even addressed the issue in a news conference.

"It's a bit premature to say it's been a failure. They have delivered 24,000 rooms," he said. "Surely there have been some issues, but we are really doing our best."

Everything you are seeing about the Sochi games could come down to one question--what did you think was going to happen when you awarded Russia the games in the first place?
If you pick a poor, corruption-riddled country to host the Olympics, you're going to get a cut-rate, falling down, cheap-assed venue in which to hold the games. The International Olympic Committee should bear the brunt of this abuse, not the poor Russians of Sochi who have had this pushed upon them by their scandalously corrupt government. The IOC is the problem. If you choose to look the other way and accept a bid from a country where billionaires go to jail for nothing, reporters die unexpectedly, and where the government is run for life by a thug, this is exactly what you're going to get.
It's not that these are "first world problems." You would find many of them anywhere, including the United States. It's that you have them in a country where there is no rule of law, no recourse for the aggrieved, and no respect for life or liberty. It's one thing to laugh at the fiasco. It's another thing to appreciate what it must like to live there.
on February 06, 2014