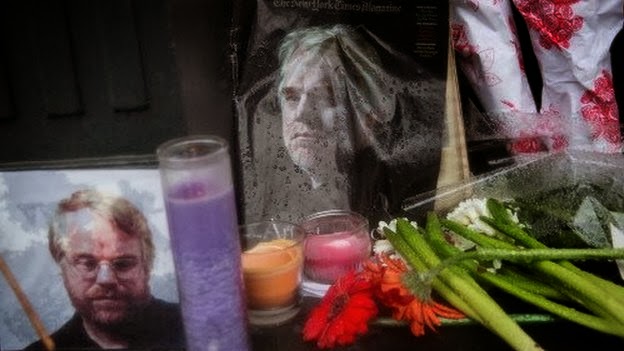 Oh, wouldn't it be nice if someone at the BBC knew something-something about how the American media works:

His self-inflicted death is yet another hallmark of the broken leftist culture that dominates Hollywood, enabling rather than preventing the loss of some of its greatest talents. Libertarianism becomes libertinism without a cultural force pushing back against the penchant for sin; Hollywood has no such cultural force. In fact, the Hollywood demand is for more self-abasement, less spirituality, less principle, less standards.

This blurb comes at the end of a compilation of reactions to the death of actor Philip Seymour Hoffman. It attempts to show some "balance" where none is really needed. If you want balance, why would you go to a known click-bait troll like Ben Shapiro? He is an acolyte of the late Andrew Breitbart (whose sudden death I greatly admired and cheered) and functions solely as a manufacturer of misplaced, phony outrage. His audience consists of anyone crazy enough to think President Obama presides over a communist government full of Muslim Brotherhood commandos.
Adding his reaction to your list does nothing to advance the discussion. Shapiro has no credibility. If you're going to do a rundown of media outlets, why would you taint your list by including one that advances discredited theories and features the rants of crazy people (The Huffington Post notwithstanding, of course)?
I mean, I had a bit of a shock there. Shaprio is now credible and thoughtful? How did that happen? But, in this case, he uses the tried and true tactic of linking morality to Hollywood. If he had been paying attention, he would know that Philip Seymour Hoffman killed himself with drugs far away from the trappings of Hollywood in a simple apartment in New York City. He had nearly finished filming his parts for the last of the Hunger Games movies, which do a better job than any recent series of films to demonstrate ethics and values.
Hoffman was simply not a part of the "lefty" Hollywood culture. He was a New York actor, which means that he purposefully rejected the conventions of celebrity and tried to live a decent, ethical life away from the bubble of Hollywood. You can argue all you want about the morality of living in a city teeming with drugs and trying to be an artist, but, come on.  This was a man who walked his children to school and caused himself great pain for his art. He was prolific and worked exceptionally hard and never, ever phoned in a performance or pulled a Bruce Willis on people.
Morality has nothing to do with addiction science. The most moral and upstanding people in the world suffer from addictions; when Shapiro makes his point about "lefty" Hollywood culture being responsible for this, he further destroys any possibility that he might have an ounce of credibility.
on February 04, 2014