Jets and Buzzbombs and A-Bombs and All That 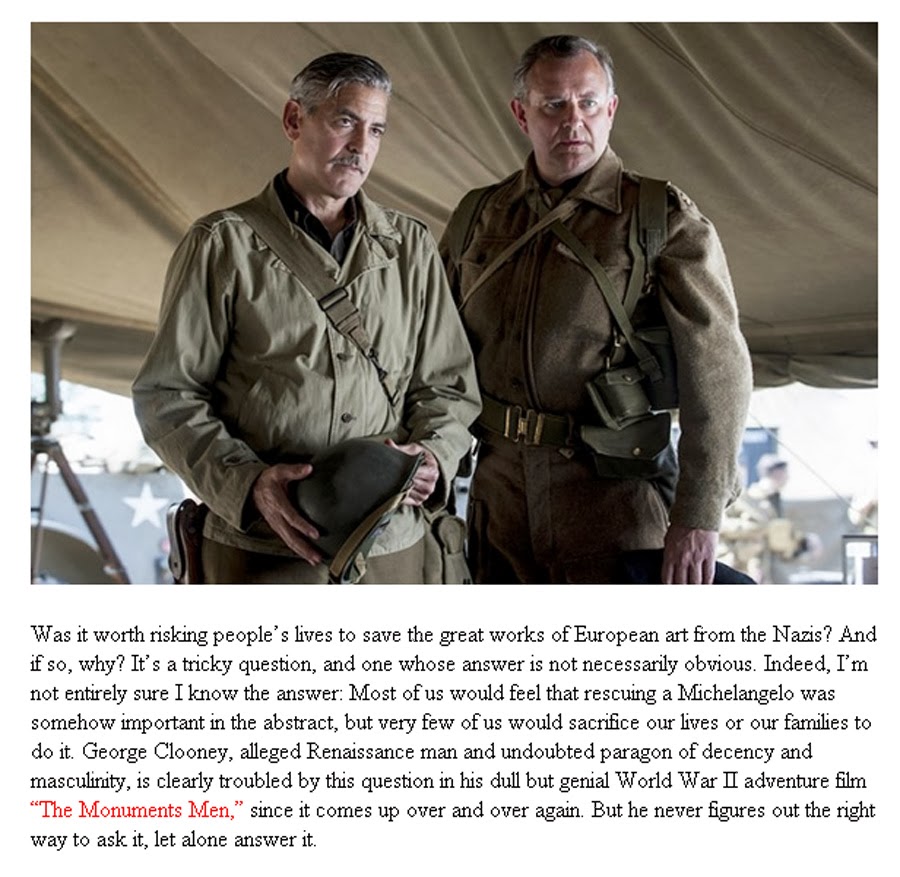 I don't have a real problem with focusing on an effort to preserve the cultural treasures of Europe. The film Monuments Men is an attempt to tell part of a story that begs for a look at the context of the history that surrounds it.

The V2 rockets that were hitting Allied-held territory and Britain were far more important than old paintings and churches and things of that nature to the men trying to liberate Europe. These weapons were terrorizing millions of people even though they rarely hit their targets. They were part of the group of "miracle weapons" that the Germans felt would turn the tide of the war. Chief among them were the V1s and V2s, the ME-262 jets, and the development of a possible Atomic bomb by German scientists in the Black Forest region.

You can say whatever you want about secret weapons, but if the Germans had developed a series of A-bombs, no amount of skullduggery would have saved the artworks and no one would have been able to defeat Germany. They would, of course, have poisoned themselves in the process of destroying the advancing armies with a series of A-bomb detonations, but still. The French and the American 7th Army raced each other to Haigerloch for one reason and one reason only--they were afraid that the great German scientist Werner Heisenberg and his team had been able to succeed in building a working device.

Clooney should have made this movie:

Operation Alsos was an Allied effort commanded by the Russian-American Colonel Boris T. Pash. He reported directly to General Leslie Groves, commander of theManhattan Engineer District, which was developing atomic weapons for the United States. The chief scientific advisor to Operation Alsos was the physicist Samuel Abraham Goudsmit. Goudsmit was selected for this task because of his knowledge of physics, he spoke German, and he personally knew a number of the German scientists working on the German nuclear energy project. He also knew little of the Manhattan Project, so, if he were captured, he would have little intelligence value to the Germans.

The objectives of Operation Alsos were to determine if the Germans had an atomic bomb program and to exploit German atomic related facilities, intellectual materials, materiel resources, and scientific personnel for the benefit of the US. Personnel on this operation generally swept into areas which had just come under control of the Allied military forces, but sometimes they operated in areas still under control by German forces.

Berlin had been a location of many German scientific research facilities. To limit casualties and loss of equipment, many of these facilities were dispersed to other locations in the latter years of the war. The Kaiser-Wilhelm-Institut für Physik (KWIP, Kaiser Wilhelm Institute for Physics) had mostly been moved in 1943 and 1944 toHechingen and its neighboring town of Haigerloch, on the edge of the Black Forest, which eventually became the French occupation zone. This move and a little luck allowed the Americans to take into custody a large number of German scientists associated with nuclear research.

To me, it's the better story. Who wouldn't like to see a movie about the real Heisenberg? The Atomkeller is an old beer storage cave under an impressive church. The scale of the thing is ridiculously small--you could barely put a restaurant into the place. But who knows what would have happened if Heisenberg had been given more time and resources?
on February 07, 2014