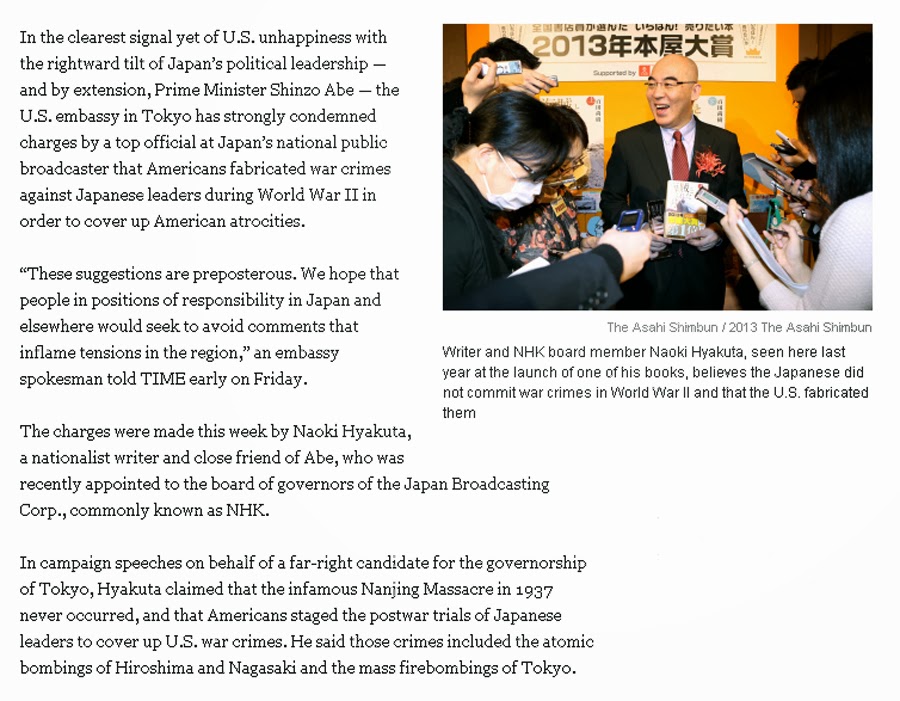 Naoki Hyakuta has a great deal in common with America's rabid band of Obama haters. He's a nationalist in the sense that he has succeeded in life by taking advantage of Japan's historical ignorance. People like Glenn Beck and Sean Hannity appeal to the same sort of audience in the United States. Historical facts are easy to ignore when you have a money-making plan based on using the media as a way to reach potential donors or customers. This is what race hustlers do--they gin up outrage and pretend to be controversial so that they can raise money from the tribalists who enjoy the attention. Paging Ann Coulter.

He does not represent Japan, or the Japanese people. Hyakuta represents his own agenda and his own need to attract attention to himself. Japan has never been led by anyone as good as its own people and you could say the same thing about the United States. Our own presidents rarely communicate or represent actual knowledge of American history. This is why few of our own presidents ever do anything to help the lives of Native Americans or delve too deeply into what remains of our own imperialist priorities.

There are people who seek to improve their country by criticizing it and trying to make it better. Then there are people who know that they can wring money out of the ignorant and appeal to their need to live inside of their own narrowly-defined reality.

It was Japanese government policy to annex territories and exploit them. The purpose of the war that Japan started in the Pacific region was entirely centered around the exploitation of people as labor capital and the wholesale confiscation of the natural resources found in those sovereign territories and protectorates. That's why Japan went to war not only with the United States but with England, Australia, New Zealand, and the Netherlands as well. Hyakuta wants you to focus on the American aspect of the war while neglecting to mention that Japan invaded Manchuria and made war on China and a host of other countries. Atrocities were commonplace occurrences for the Imperial Army.

Japan's relationship with Korea prior to World War II puts to rest the idea that Japan was a "victim" in any sense of the word. The Hyakutas of the world are counting on people to forget that the impressively detailed documents that survived spell out just how aggressive Japan's national ambitions were long before Pearl Harbor. His cheap rhetoric about "made up" atrocities should be considered his own attempt to find Obama's real birth certificate. It's a transparently inept ploy and it shows tremendous disrespect for the true remorse demonstrated by the Japanese since the end of the war.
on February 10, 2014