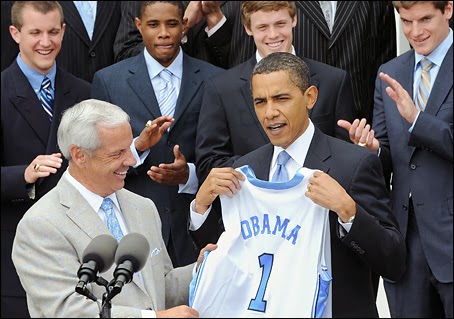 I realize that the intent of this story was to indict many of the college basketball programs out there, but this story falls pretty hard on Roy Williams and the North Carolina Tarheels:

Early in her career as a learning specialist, Mary Willingham was in her office when a basketball player at the University of North Carolina walked in looking for help with his classwork.

He couldn't read or write.

"And I kind of panicked. What do you do with that?" she said, recalling the meeting.

Willingham's job was to help athletes who weren't quite ready academically for the work required at UNC at Chapel Hill, one of the country's top public universities.

But she was shocked that one couldn't read. And then she found he was not an anomaly.

Soon, she'd meet a student-athlete who couldn't read multisyllabic words. She had to teach him to sound out Wis-con-sin, as kids do in elementary school.

And then another came with this request: "If I could teach him to read well enough so he could read about himself in the news, because that was something really important to him," Willingham said.

First of all, let's all just grow up, shall we? If this falls on coaches from previous eras, their coaching records could suffer because of this revelation. If this has been handled, fine and dandy.

If it is still going on, holy hell--we have a problem (obligatory eye roll here). I'm not saying that it's an immediate issue, but it does require an NCAA evaluation of literacy among student athletes--a test that can't be faked or taken for them. In this case, you have to panic a bit because, for example, say Old Roy has a kid playing basketball for him who can't read or write. You know the drill. Someone is taking this kids classes, taking his tests, and falsifying the academic records for him so that he can remain eligible to practice or play. Uh oh is right. This is what ruined the University of Minnesota men's basketball team, and sent Clem Haskins to...another job at another school. See how the system perpetuates itself over and over again? Slap on the wrist, optional.

Without realizing what she has done, Willingham has exposed the University of North Carolina's basketball program as a sham for illiterate athletes. If this student athlete, whose anonymity needs to be addressed, was a part of a championship team, then that championship should disappear into the ether. Yes, that means that you're going to have to strike a lot of achievements from the records of other teams and coaches as well. In the case of North Carolina, someone ought to be yelling "oops" about this story. As in, "oops, someone just pulled back the wrong curtain."

It's really not complicated. They are cheating when a kid who can't read and write plays basketball.

Second, is it 1983? Is it 1994? Is it 2001? I can't tell what year it is from reading the article because you can find similar ones going back to the dawn of college basketball as a money printing machine for universities all over the country. I mean, it's what Coach Bobby Knight fought against when he was at Indiana and had to go up against Big Ten teams stocked with academic frauds in tight shorts. Graduation rates, please?

Hello? Is this thing on? In other words, what we're talking about isn't even news. It's how the game is played. For decades, the wrong priorities have ruled over things, and it all comes down to using students to make money hand over fist.
on January 08, 2014