The Air Force is Not An Occupation For Warriors 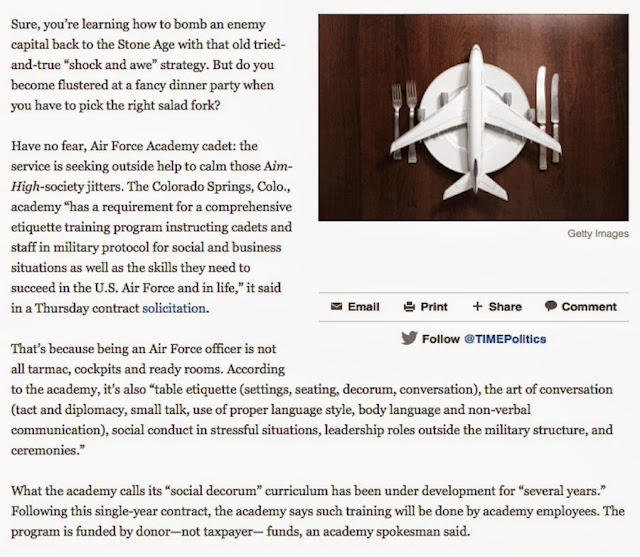 You cannot make this up. Not even if you were working at The Onion and getting paid to do it. Yes, the Air Force is worried that their own personnel will look like heels in a formal dining room. No, they're not going to impress anyone by eliminating the uncouth from their ranks.

The Air Force needs to recruit and retain highly professional people. Training them in napkin etiquette happens naturally, not through special classes.

I believe we can have a military that is exceptional and highly trained, but we need to leave the 19th Century behind and focus on things that matter, like finding what few people still exist who can put others before themselves and maintain high standards of professional conduct. How does the Air Force Academy feel about Christian conservatives and their relentless assault on cadet life? What happens when one of those outfits wins the contract?

The service academies need to go away. They are an anachronism and we are already well served by choosing officers from the ranks of college graduates anyway. The warrior spirit continues to be beaten down again and again, though. This is the most troubling aspect of all.
on January 13, 2014