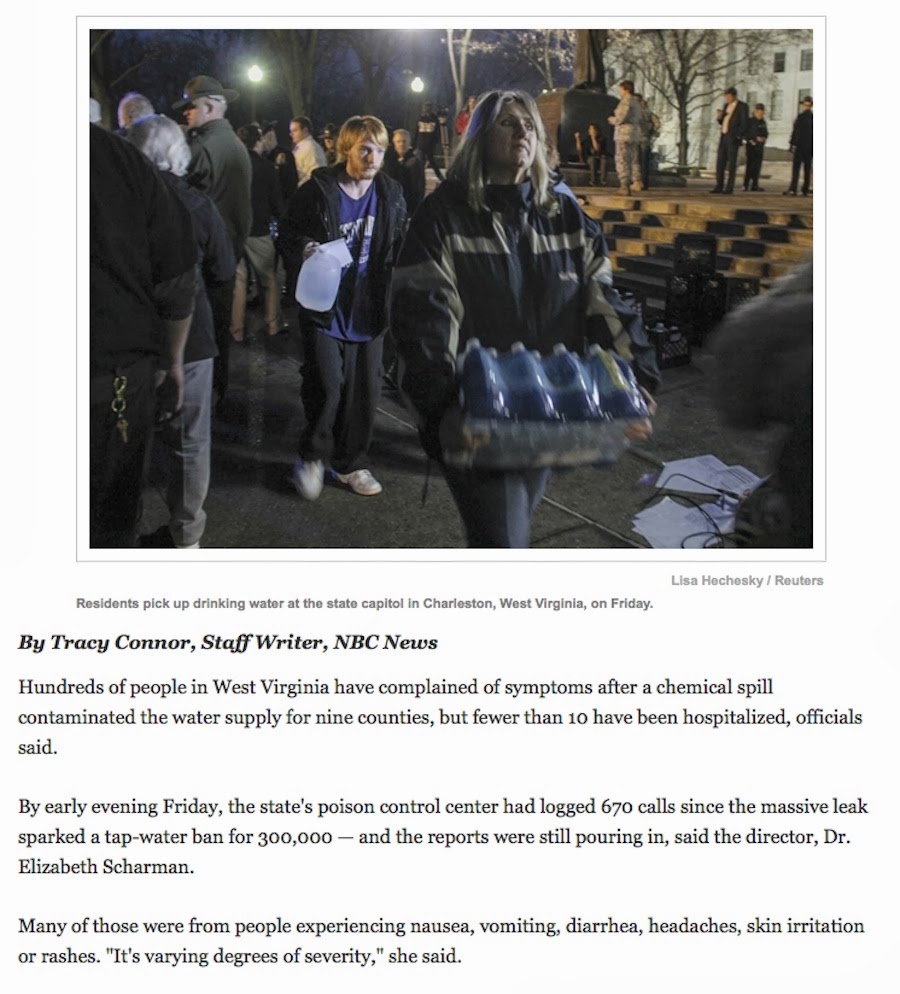 Back in the day, we had an anti-war movement, an environmental movement, and a labor movement. The ratfuckers and the bagmen and the Republicans--pretty much all one and the same--have systematically destroyed advocacy as a way of life in this country. There are still people who care about clean air and clean water, and there are people who care about the militarization of the police and the destruction of labor rights, but they've been turned into criminals, they've been watched by police intelligence units, they've been deemed ACORN sympathizers (thereby marginalizing them because, well, ACORN no longer exists) or worse.

The people you see above need advocates now. They need people to raise hell about what happened to their ground water. They need to organize and agitate. They need to complain to high Heaven. They need to say something about what it's like to live in an area where the very water they're supposed to be able to drink and bathe in is doused in chemicals.

The militarization of the police helps strike breaking companies and it allows polluters to run wild. Any attempt to watch them or stop them is met by batons and violence. If you think the people you see above should be rioting or protesting, think again. They should be lucky to get their bottled water and they should watch for people they have never seen before, showing up to write down their license plates. They should be mad as hell once they get home and figure out what to do next. But they should think again before holding an American corporation responsible for anything because, well, that simply won't do. We don't hurt the fee-fees of job creators and we don't want another Occupy movement, do we now? Good.

At some point, in the next few days, you'll see how this was all Obama's fault how these corrupt and incompetent chemical companies were allowed to poison the watershed of West Virginia and threaten hundreds of thousands of people with sickness or even death.

How many kids have to die from gunshots, neglect, malnutrition, abuse, or environmental poisoning for people to wake up and see that their way of life is being stripped from them by paid shills and politicians who can relentlessly litigate and legislate and regulate what they want to have stuck in a woman's vagina in order to scare her out of having an abortion but can't help themselves from giving dangerous chemical companies the right to do whatever they want whenever they want without fear of a fine or a nosy government inspector showing up unannounced? Sorry to go all run-on sentence on you, but, damn. How many people have to live in fear, horror, and pain so that someone can buy a fifth house?

Thanks, Obama. I'm sure that someone at Fox News is figuring out how to blame you for this.
on January 11, 2014