Lord George Robertson Forgets About the History of Scotland 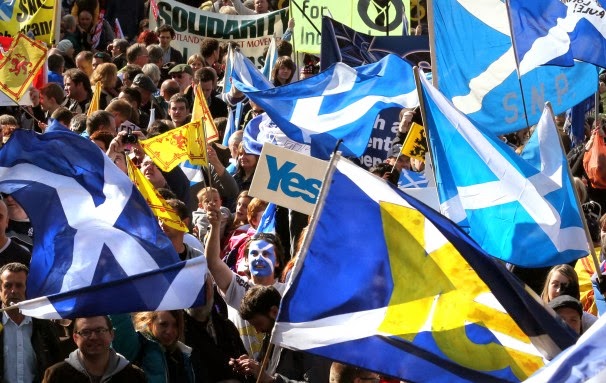 This is crazy talk:

The global balance would be substantially upset should one of the West’s key unions, and its second-biggest defense power, split up. The United Kingdom has always punched above its weight diplomatically and militarily. A breakup would have a serious effect on its role in the world — all the more so because Britain’s nuclear-deterrent base is in Scotland, and those advocating separation have pledged to expel it. With the United States and other countries viewing a possible British withdrawal from the European Union as negative, how much more disturbing would they find a breakup of the country itself?

The ripple effects would not be limited to the United Kingdom. Other separatist movements in Europe are watching the Scottish debate with undisguised interest. In Spain, more than a million Catalans have turned out in the streets calling for independence. In the Basque Country, separatist violence has waned, but the desire for a separate state remains. In Belgium, whose unity hangs on a thread, Flemish nationalists have made it clear that if Scotland has a free pass to the European Union and NATO, they would be next in line. There could be more breakaways to come.

This is self-determination writ large across the face of Europe. Blaming the Scots for this is ridiculous--the separatist movements of Europe have been simmering for hundreds of years because these problems were created by the scheming of kings and diplomats hundreds of years ago. Blame Napoleon for it all if you want (and try to imagine a British victory with Scottish cannon fodder at Waterloo), but England's problem with Scotland rests firmly with the force used on the people to subjugate them and confiscate their lands and bifurcate them from themselves to create insecurity and inferiority.

Was it the end of the world when Ireland became an independent country? Did it bring down the Empire? No, the self-determination of millions did that (plus a war that revealed that Britain couldn't hold on to everything forever). Should they send the Navy? Does Mr. Cameron plan on building a fleet to keep Scotland in check? I'd love to see that.
The Scots want to control the North Sea oil revenues. That's it. They are going to hide behind all of the other issues in order to make it plain that they want that money. If the English government figures out how to share that revenue, there won't be an independence day for the Scots. How hard is that to figure out?
Lord Robertson ignores the painful history and glosses over the violence with which the Scots were made British:

The ties that bind the United Kingdom are strong, but there would be profound international implications should the Scottish people choose secession. The residual United Kingdom would still be a major player in the world, but upon losing a third of its land mass, 5 million of its population and a huge amount of credibility, its global standing would inevitably diminish.

The ties that bind the two entities were forced on the Scots and covered in blood. The victor always forgets the pain of the vanquished. But are there enough people who care? Are there going to be enough votes to risk the social safety net and the world's oil market fluctuations in order to carry this through? What a people feel and what they will actually vote for are two separate things. It would take a suspension of pragmatism to motivate a vote for independence. But the sad reality eludes the traditionalists. The United Kingdom isn't a player in anything anymore. Good God, man. Save yourself and try to be the better tourist destination. Your people can't make anything except repackaged debt and the occasional Eurovision winner. Get over yourself.
on January 06, 2014
Email ThisBlogThis!Share to TwitterShare to FacebookShare to Pinterest
Labels: Economics, Energy, Government, History, News, Opinion, Politics, Voting