Always Good For a Laugh 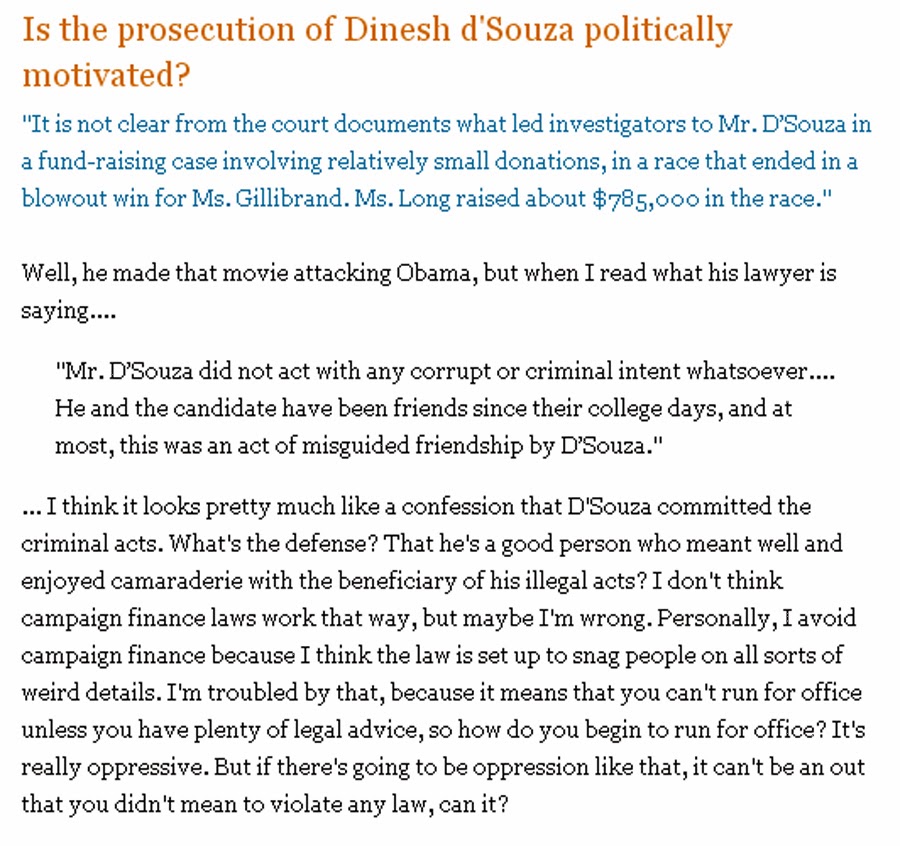 Ann Althouse misses the point entirely when she makes her attack about our weak campaign finance laws and not the complete and utter disregard of the rule of law by half-assed conservative pundit and filmmaker Dinesh D'Souza. It isn't about the law--it's about the fact that D'Souza is a serial hypocrite of the highest order who got caught because he simply didn't respect the very simple and basic rules that govern who can give money to a candidate and how much they can give. So, there's that. And, of course charging him with violating campaign finance laws is "political" because D'Souza operates entirely in a political world where everyone is accountable for their actions except himself. His respect for the rule of law is legendary--especially family law.

Saying that the law is "oppressive" is laughable. How can the law be oppressive in any way, shape or form for a conservative intellectual of D'Souza's background? Did he not go to college? Wasn't he supposed to be a smarty-pants? That's the kind of stupid Ann Althouse is famous for. And her braying pack of jackasses will eat it up until they all dissolve into their wine and confusion.

D'Souza will claim he is a martyr, that he is being silenced, and that President Obama spends all day, huddled with his advisers, trying to find a way to destroy him. It couldn't possibly be the case where D'Souza acted like an idiot and got caught doing something ridiculous. It couldn't be a case where he got caught doing something that a functioning adult with basic common sense could have gotten away with just by operating with the barest of noble intentions. Nope.

If you're stupid enough to get caught violating laws no one enforces anymore, you deserve to be indicted and blasted for it. The "weird details" of Althouse's imagination really don't go any further than getting caught giving a candidate more money than they were supposed to give and then reimbursing them with payments that can be easily traced and discovered:

Federal prosecutors in Manhattan said that Mr. D’Souza encouraged others to give $20,000 to a Senate candidate and reimbursed them for the donations. Election law prohibits such arrangements and caps donations at $5,000 per donor to any one candidate.

The Senate candidate was not identified in the indictment. Mr. D’Souza donated to only one federal candidate in 2012, giving $5,000 to Wendy Long, a New York Republican who lost her challenge to Senator Kirsten E. Gillibrand, a Democrat.