Which Police State Do You Live In? 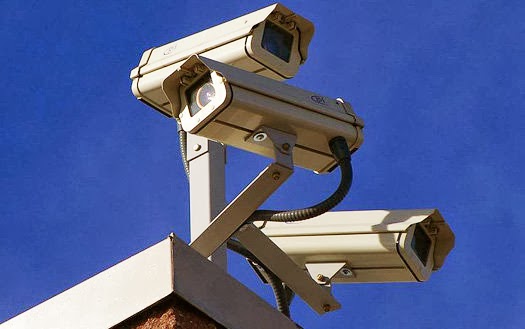 Do you remember voting for this?
Each and every time you voted since 2001, did you vote specifically for a candidate who would dismantle the Patriot Act? Did you vote in your local elections for a city or county government dedicated to controlling the militarization of the police? Did you sign up for Facebook years ago and forget to read the fine print? Too late now.
The police state arrived while no one was paying attention. Each and every time one of us steps into the world, we are under surveillance. We are being watched on our phones, our computers, and when we drive a car with a GPS device in it. We are being watched by cameras and readers and when we drive into urban areas, we are being watched at an unprecedented rate. When we buy things, we're being tallied and sold off to third party advertisers. Everything we do is under the watchful eye of a cop or a seller or a bureaucrat. So, you can crap yourself and stop living your life or go have a blast and say fuck it all anyway.
Live weird. Confuse them. Buy things you throw away. Eat crap. Sing and dance like no one is recording. Breathe and enjoy this life.
You see, all is well.

A federal judge ruled Monday that the National Security Agency's bulk collection of phone records violates the Constitution's ban on unreasonable searches, but put his decision on hold pending a near-certain government appeal.

Leon, an appointee of former President George W. Bush, ruled Monday that the two men are likely to be able to show that their privacy interests outweigh the government's interest in collecting the data. Leon says that means that massive collection program is an unreasonable search under the Constitution's Fourth Amendment.

You don't have anything to worry about.

The Metropolitan Police Department is collecting images of license plates by the millions and storing them in a massive database with no regard to whether or not that person is under suspicion of anything, according to WAMU.

WAMU's Martin Austermuhle reports that D.C. police cars which are equipped with Automatic License Plate Readers have collected more than 150 million images of license plates through this past September.

They're generally used to match up the license plates with a list of vehicles that are known to be stolen and keeping tabs on high-crime areas, police officials tell WAMU, but civil liberties advocates believe that they can be used to track people who have done no wrong.

As described in "How we use the information we receive" we also put together data from the information we already have about you, your friends, and others, so we can offer and suggest a variety of services and features. For example, we may make friend suggestions, pick stories for your News Feed, or suggest people to tag in photos. We may put together your current city with GPS and other location information we have about you to, for example, tell you and your friends about people or events nearby, or offer deals to you in which you might be interested. We may also put together data about you to serve you ads or other content that might be more relevant to you.

When we get your GPS location, we put it together with other location information we have about you (like your current city). But we only keep it until it is no longer useful to provide you services, like keeping your last GPS coordinates to send you relevant notifications.

We only provide data to our advertising partners or customers after we have removed your name and any other personally identifying information from it, or have combined it with other people's data in a way that it no longer personally identifies you.

We are already living in a surveillance state that is driven by paranoia and marketing. The only real difference here is that the Federal agency, which is part of the Department of Defense, that everyone is scared of is actually under far more rigorous oversight than your local cop shop or Facebook. But don't let that get in the way of being terrified. Everyone needs a bogeyman, and now that Osama is dead, why not use whatever is left over?
on December 17, 2013