Todd Starnes Writes the Same Story Over and Over Again 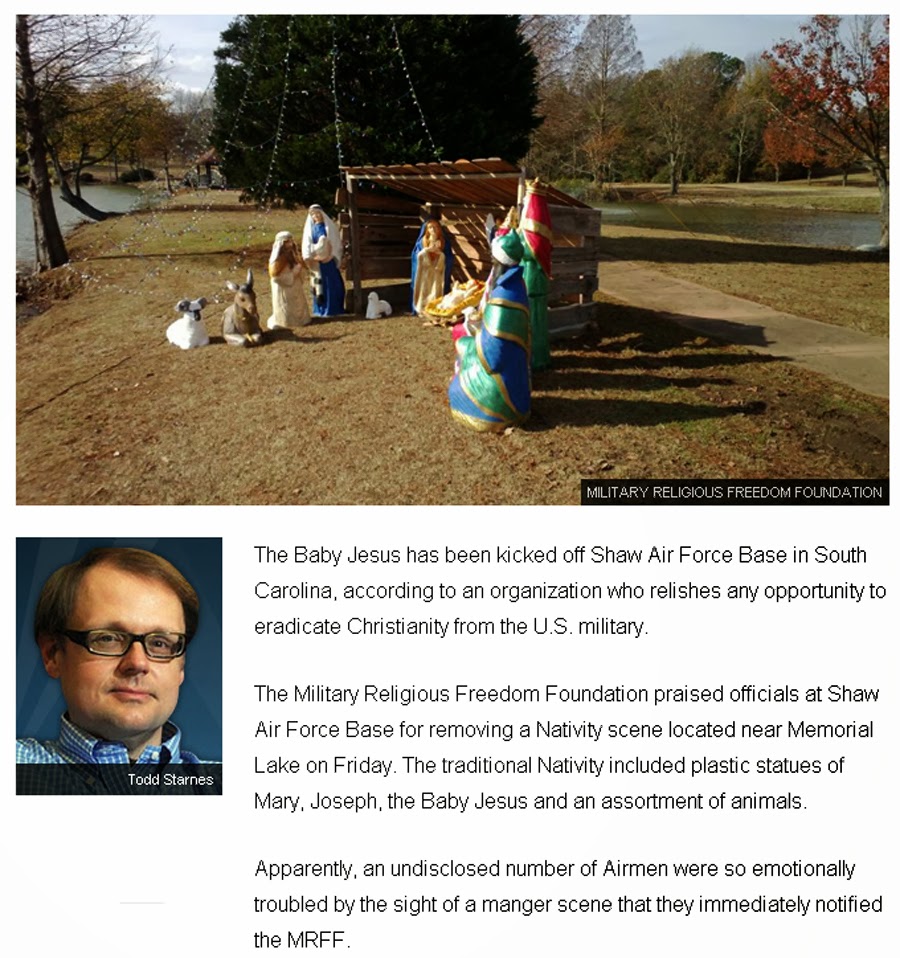 Todd Starnes writes an annual "war on Christmas" story and the military obliges him with plenty of examples as to why he needs to be the guy to write this story for Fox News. Every ginned up controversy needs a useful idiot, so why not go with Starnes? He doesn't understand the military or good order and discipline, so, victory, I guess.

You see, the military, which reflects American society, is made up of people who prefer diversity to fundamentalism. The rules actually specify that you can't marginalize or denigrate others and if they complain, you have to respond and try to make things better. Not perfect, just better. The military is made up of people who know what freedom is as opposed to what freedom should be marketed as in order to keep the hits a'comin' on the Fox News website.

Here's Starnes a year ago: 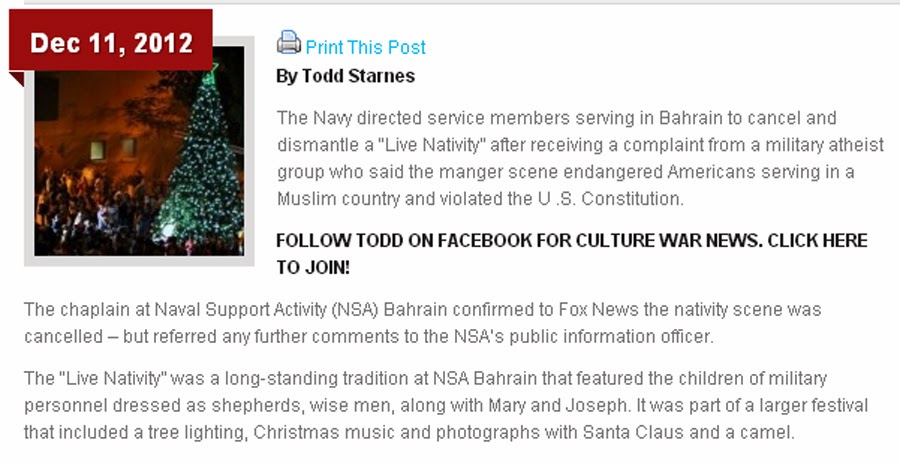 That's the same damned story! How'd he do that?

Not to be outdone, there are other people who want to get in on the phony outrage action: 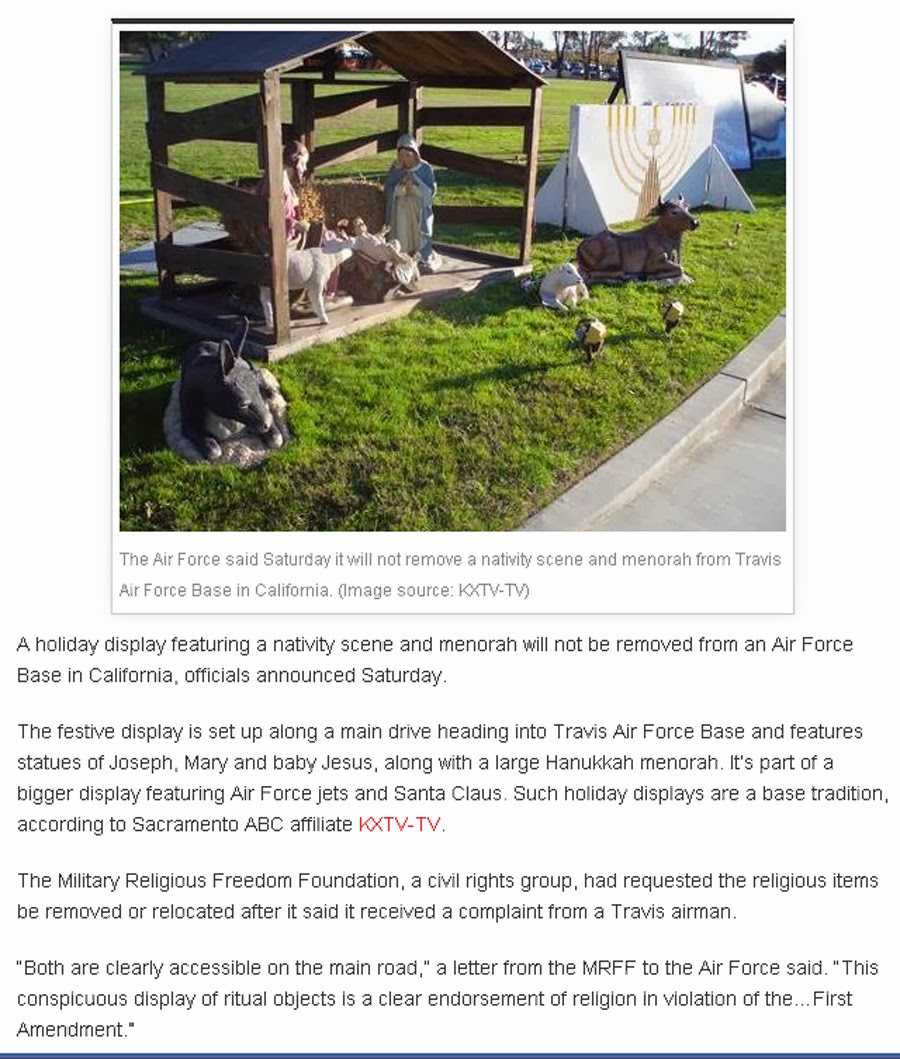 And then there are people who want to dress up and carry around a fake plastic baby Jesus: 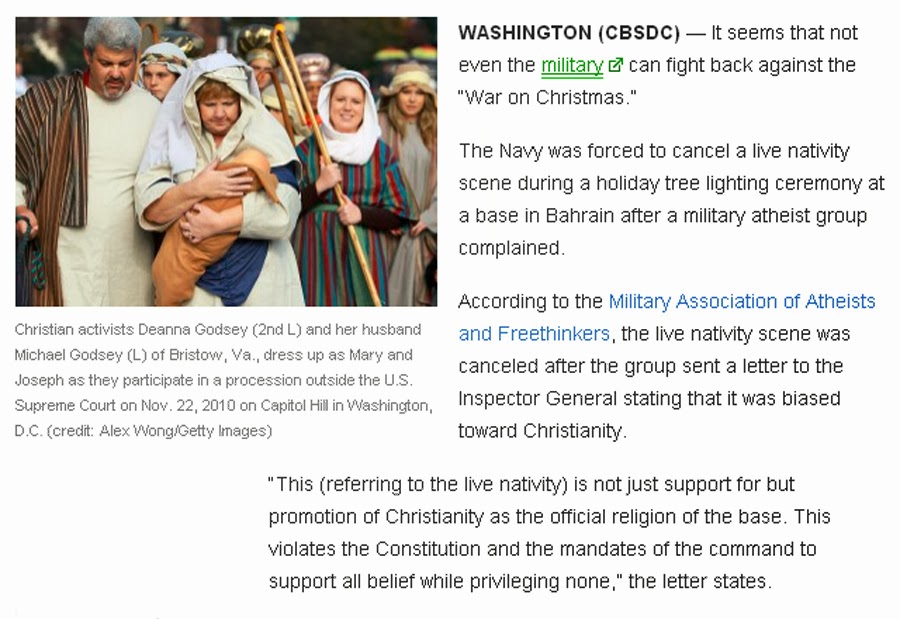 The war on Christmas is a phony, made-up thing and Todd Starnes is making hay from it because he can always count on people to not pay attention to the fact that military bases tend to operate as tolerant, law-abiding places:

“Upon further review, the CRP (Command Religious Program) will be removing the Living Nativity Program from the general base secular holiday festivities

and co-locating it more appropriately with some of our other private religious and faith-based observances at the chapel at a separate time,” the Inspector General’s office stated, according to MAAF.

Yes--the religious program that is already a part of the command on the military post are simply going to respect the wishes of others and move the nativity scene to a more appropriate venue--the chapel that is located on the military post. Imagine that.
No one is tearing baby Jesus apart. Nobody's Chaplain is being dragged before an Article 32 hearing. No one is setting fire to the rain or the nativity--they're just acknowledging that people don't want to deal with it and they're moving it to a better location in order to demonstrate respect for others and good order and discipline. Damn, son. Any more of that and we'll see the whole world turned upside down.
In the world where Todd Starnes live, anyone in the military who respects the beliefs and practices of others is weak. In point of fact, they are stronger by country mile just by showing tolerance and acceptance.
on December 11, 2013