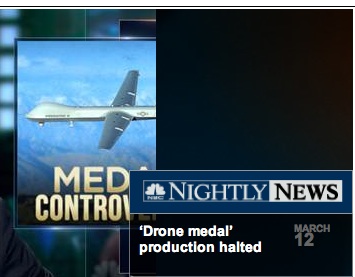 Someone is mad that they didn't get their medal:

I may not have been on the ground in Afghanistan, but I watched parts of the conflict in great detail on a screen for days on end. I know the feeling you experience when you see someone die. Horrifying barely covers it. And when you are exposed to it over and over again it becomes like a small video, embedded in your head, forever on repeat, causing psychological pain and suffering that many people will hopefully never experience. UAV troops are victim to not only the haunting memories of this work that they carry with them, but also the guilt of always being a little unsure of how accurate their confirmations of weapons or identification of hostile individuals were.

Anyone who equates their experience in life with those who actually go to war is a fool. Actors do it, politicians do it, and armchair warmongers do it, too. I thank God for the fact that I have never heard a shot fired in anger. There is nothing in the world worse than that.

The effort to award drone operators a medal of their own fell flat, chiefly because men and women who faced combat and privation while deployed rightly figured that someone far remote from the battlefield who slept in their own bed at night weren't the equivalent of those who slept within range of the enemy. This is not to say that the drone operators have not suffered--I'm sure that they have. But those who don't go to war aren't in the same league as those who do. It becomes a farce--does a person operating a drone live over a combat zone get a Purple Heart if they fall out of their chair trying to maneuver their aircraft out of harm's way when it takes fire? Where does it end?
Here's more of what Heather Linebaugh has to say:

I knew the names of some of the young soldiers I saw bleed to death on the side of a road. I watched dozens of military-aged males die in Afghanistan, in empty fields, along riversides, and some right outside the compound where their family was waiting for them to return home from the mosque.

Which side were they on? If they weren't lawful combatants, then she is admitting a war crime took place because of the incompetence of the drone operator who killed these people. This is why the tactic has to end--it is too imprecise and creates a situation where the law of warfare comes down on the side of the civilians who are being killed. Linebaugh seems to have a great deal of sympathy for people who got killed because someone couldn't do their job properly and evaluate a threat. The people who suffer are the troops in harm's way who face retaliation. Do we hand out medals for that?
I oppose the use of drones for anything other than reconnaissance and a last-ditch defensive weapon. I think their use as indiscriminate killing machines across international borders is a mistake that will escalate the tactical need to hide among civilians to a much greater degree, further eliminating the line between combatants and non-combatants. But Linebaugh goes way too far with her commentary for the Guardian, trying to make herself the focus of the need to dramatically scale back the use of drones.
Now that we have canonized Edward Snowden, and made the traitor a hero, the rush to be the next Snowden begins with Linebaugh. Would you sell out your country in order to be a media darling? Linebaugh can't wait to tell you how bad it was for her and her colleagues. Good. It was bad for them. Why does that inspire them to be someone rather than do something? The video game generation has been told, again and again, how special and wonderful they are and how everyone deserves a reward for participating. When you transfer these ideas to the people asked to serve in the military, the lines are blurred and they end up being unable to put military service ahead of their own needs and feelings. This is how we end up with problems.
Imagine a survivor of Verdun, of whom there are now none left, being introduced to someone who can't handle their tenure as a drone operator. Both may suffer legitimate mental scars, but their variance couldn't be greater.
on December 30, 2013