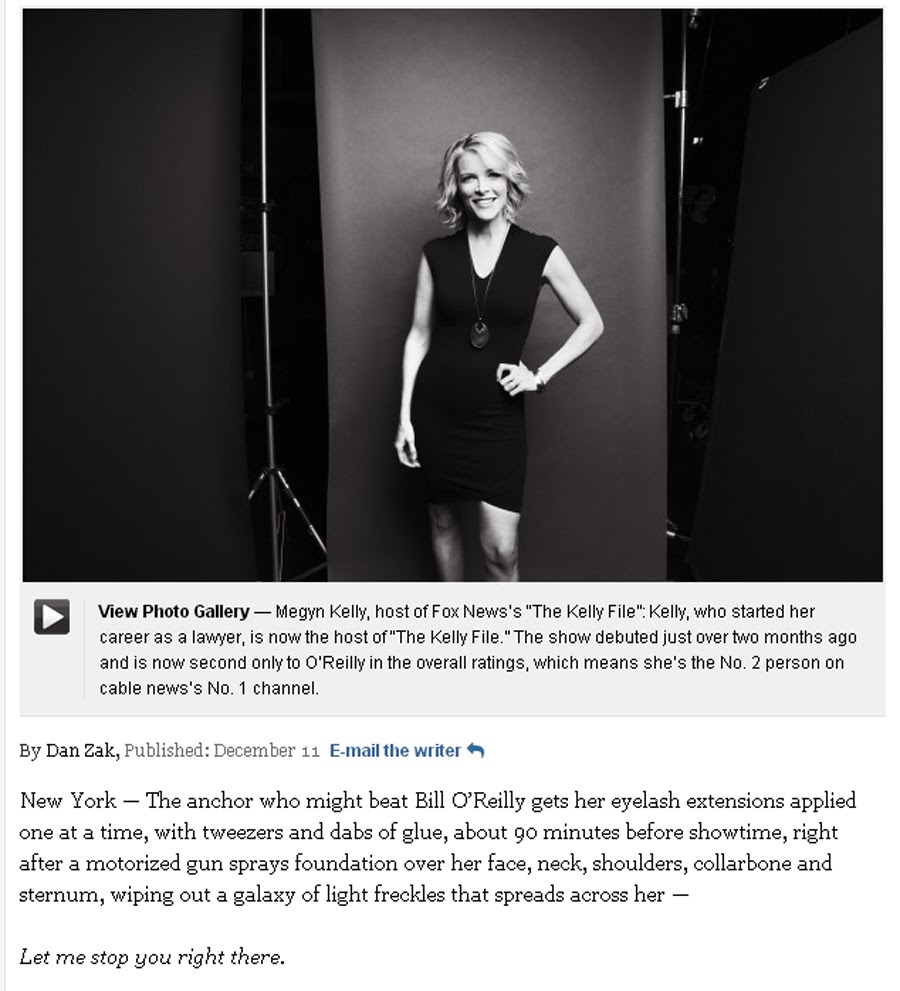 You can and you should read this article as a mash note to Fox News and their attempt to rebrand themselves. It fairly reeks of bias and favoritism, presenting Kelly as a "supermodel" who is "responsibly" leading the charge against the Affordable Care Act (which is working, thank you very much).

The network, long defined by the flickering image of an overweight white male who spews lies and garbage (but not Santa Claus, of course), has figured out that it can win by pushing Megyn Kelly out there as a figure that will make it harder to show how the network has embraced race baiting and hating anything about government that succeeds. A key component of that is to separate her from the "opinion" hosts and set her apart so that she can succeed with a gentler brand of racism. Her gender, and her appearance, are all that matters:

“It’s like working on a supermodel every day — a brilliant supermodel,” says makeup artist Maureen Walsh, as she air-brushes Kelly’s skin from milky white to Technicolor.

The small makeup room is hot from the blow dryer. Pen in hand, Kelly, a former corporate lawyer, reads an article headlined “For Democrats in 2014, the Web site is still the problem,” her eyes zipping over text as Maureen smudges heavy plum-colored eye shadow on her lids.

Kelly asks a nearby hairstylist to dial a phone number. “So you see Greta’s lead?” she says into the phone, her eyes on a muted TV. Greta Van Susteren’s topic is HealthCare.gov, whose botched rollout has coincided with Kelly’s prime-time debut. Later that evening, in the third hour of Fox’s extended prime-time lineup, “The Kelly File” will lead with the headline it has flashed almost every night for the past two weeks: “OBAMACARE FALLOUT.”

In its first 30 seconds the show will quote Sen. John Cornyn (R-Tex.): “I think the current administration has taken lying to a new level.”

Her in-person guest Andrew Napolitano, Fox’s senior judicial analyst, will ask rhetorically: Could the president’s implementation of the law “lead to impeachment?”

This is a fluff piece from the Style section of the Washington Post, but it might as well read as a paid piece of advertising. Where is that specific disclosure? Who insisted on allowing Fox News to be able to present itself in such a positive light? Who is the editor who allowed it to land with such a heavy thud? It is heavy on inside baseball politics and overloads on FAIL. As of yesterday, this article has already been overtaken by events. It doesn't even begin to deal with the fact that the Republican strategy of opposing Obamacare has failed and likely won't win them any votes. And these people certainly don't want you to know that their efforts may be responsible for the fact that far too many Americans have been scared away from signing up for Obamacare and are losing money each day because of that.

Which doesn't change the fact that the Washington Post is absolutely guilty of allowing a news organization to carefully cultivate Kelly as the future personality of a brand that doesn't even pretend to be tolerant of women and their issues. Obamacare is a women's issue--millions of women now have access to health care and contraception care at an affordable rate. You wouldn't know that because, well, I'll let the article explain it to you better than I could:

Except for the fact that Obamacare is working, and that Kelly is merely the face of an operation dedicated to lying, and that nobody cares anymore, sure. That's all true.

Someone needs to express some embarrassment over the bias and the tone of this piece before the day is out. Wow.
on December 12, 2013