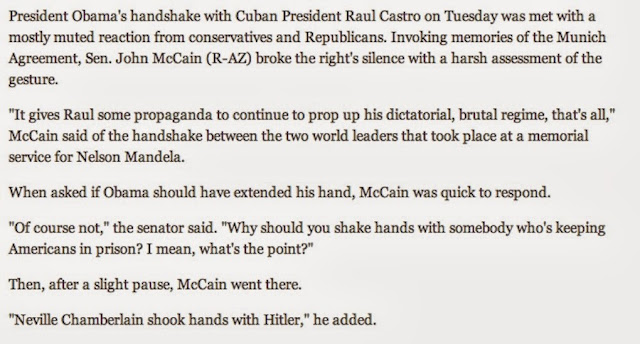 I will bet you a dollar John McCain doesn't even bother to acknowledge that he has made an unhinged, comically inept comment about Raul Castro and President Barack Obama. This is how the right wing machine operates--McCain says something full of hate and bile, the media invites him on their Sunday morning shows to talk about it, and no one remembers what a crass version of a U.S. Senator he has become.

In order to have credibility in a discussion about world affairs, you'd think that avoiding the comparisons to Chamberlain and Hitler would show a mark of sophistication and an appreciation for diplomacy. McCain is certainly welcome to an opinion that shows that he would like the president to ignore Castro and pass on the chance to open Cuba to American tourism and trade. I have a sneaky suspicion that this will be one of Obama's last acts--to open Cuba and tell the rabid Cuban-American community to go pound sand after Marco Rubio is safely out of the 2016 presidential race.

McCain's comments are the standard now--you can say anything about anyone and people will just shrug and act like nothing happened. There are no standards. Just bile and viciousness, even on the day when we're paying tribute to someone who the right wing in this country hated precisely because he was a man of forgiveness and charity.
on December 10, 2013