Dennis Rodman is a Useful Idiot 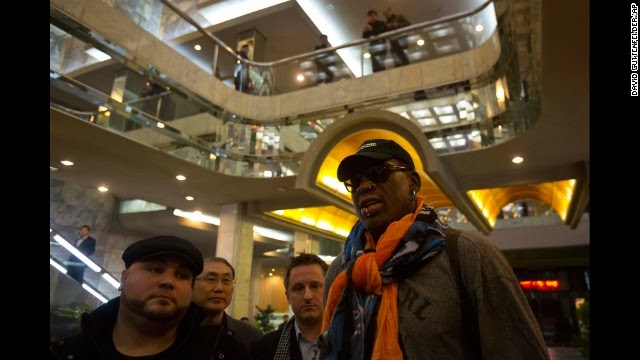 Rodman was there for his latest round of controversial "basketball diplomacy" in a country ruled by one of the world's most repressive regimes.

The former player and a documentary crew were scheduled to spend four days helping to train a team of North Korean basketball players for a January exhibition in Pyongyang.

That January 8 exhibition -- said to be against a yet-unannounced team of former NBA players -- will celebrate the birthday of North Korean leader Kim Jong Un, whom Rodman has called a friend and a "very good guy" despite international condemnation of the country's human rights records.

Dennis Rodman is not a traitor, however. A traitor is someone who has some merit or value to the state that they have betrayed. Rodman is a broke NBA player with child support issues. The North Koreans might very well be paying him--I don't know. All of that meth money has to go somewhere.

Don't let anyone tell you otherwise--he is dealing with psychopaths and a criminal element that has enslaved millions. The average North Korean will never see Rodman or get a change to talk about starvation and fear. He is very useful to the psychopath who holds the reins right now and, for that, Rodman is well qualified. He played a game run by psychopaths with psychopaths, but, at least in his day, they could hit the rim when shooting from 15 feet away.
on December 19, 2013