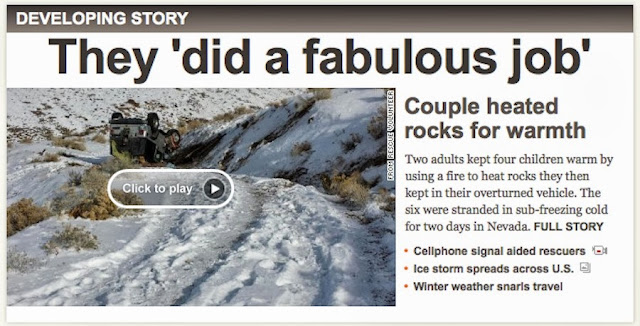 I'm sorry, but this happened because of sheer dumbassery:

In a search involving 200 people, rescuers finally located the family on Tuesday after they had gone missing two days earlier during a playful outing in the snow in mountainous northwest Nevada.

This playful outing involved going into a remote area and joyriding. With children, four of them, in a Jeep. Why were they doing this and why isn't anyone else a little more critical of their choices? Why does the article here gloss over why they were in the mountains and focus on the fact that they were found because of a great deal of hard work undertaken by a number of people who risked their own lives?

Grow the hell up. Respect the climate and the geography where you live. And try to remember that a Jeep does not give you a license to fly across valleys and jump mountains and live life like a Mountain Dew commercial.

It's good that everyone was found. I'm sure it was a traumatic event. But it was avoidable. Don't go joyriding on mountain roads during a deep freeze. Watch a weather forecast. Leave the kids out of your plans to go muddin'. And keep some better winter weather emergency supplies in your damned Jeep.
on December 11, 2013