You're Still Talking About the End of the World 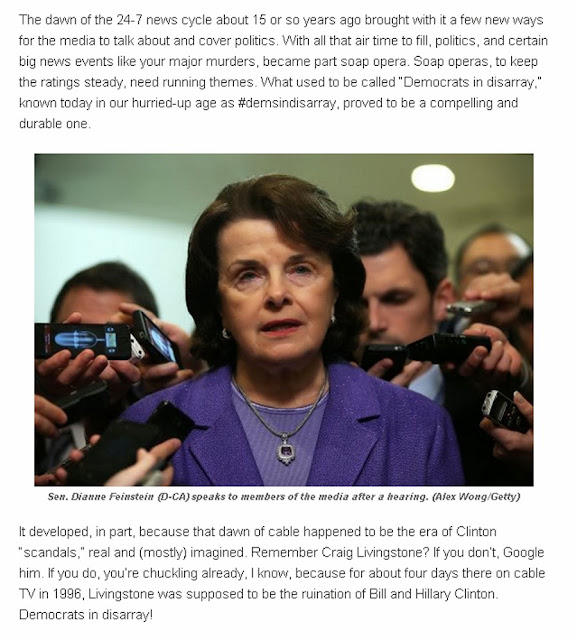 Why are we talking about the ruin of the Democratic Party? Is it because it is a political party bent on losing as often as it can because winning looks like the other guy isn't worth fighting anymore?

Every major initiative comes with problems, and when you are trying to take people from an ever-increasingly expensive and ineffective health care system to one that provides for the uninsured, you're going to see sabotage and frustration. This is the sabotage and frustration phase of Obamacare. Don't worry--we're going to live through it and come out for the better on the other side.

Anything that provides more and not less health insurance coverage for the American people is an improvement. I'd love it if it were better (like a public option) but I'm not going to lose my shit because a website doesn't work perfectly right off the bat. The battle to improve the health care sector of America's public life is going to take decades to wage and there will be peaks and valleys. There will be battles of a regulatory and a policy nature for another generation and then, when all is said and done, we'll be fighting again and again to stop the losses and exploit the gains of controlling something that is practically uncontrollable. We'll be fighting to lower the age where people can cover their kids--we'll be fighting over costs and we'll be fighting the states in order to expand or improve care. As soon as you stop fighting, we're all done and the insurance industry will grow and have more power and more influence and they'll make more money.

The fight worth fighting is the one where you make life better for as many people as possible. The Affordable Care Act makes life suck for people who have a lot of money and power and privilege in order to make life better for a lot of people who have seen everything spiral out of control for the last twenty years. I'm not going to panic and throw my support to people who still think triangulation, compromise and negotiation with crazy people is the way to go.

Nobody fucking lied to you:

the insurers didn't tell their clients that the new plans would only be available for a short period of time, the blame would seem to rest with the insurance companies, not the ACA. After all, President Obama did not promise people that he would keep insurers from developing new plans that will not comply with the provisions of the ACA.

In addition to the new plans that were created that did not comply with the terms of the ACA, there have been complaints that the grandfathering was too strict. For example, insurers can only raise their premiums or deductibles by a small amount above the rate of medical inflation. As a result, many of the plans in existence at the time of the ACA are losing their grandfathered status.

In this case also it is wrong to view the insurers as passive actors who are being forced to stop offering plans because of the ACA. The price increases charged by insurers are not events outside of the control of insurers. If an insurer offers a plan which has many committed buyers, then presumably it would be able to structure its changes in ways that are consistent with the ACA. If it decides not to do so, this is presumably because the insurer has decided that it is not interested in continuing to offer the plan.

As a practical matter, there are many plans that insurers will opt to drop for market reasons that may or may not have anything to do with the ACA. It's hard to see how this could be viewed as a violation of President Obama's pledge. After all, insurers change and drop plans all the time. Did people who heard Obama's pledge understand it to mean that insurers would no longer have this option once the ACA passed?

If Obama's pledge was understood as ensuring that every plan that was in existence in 2010 would remain in existence, then it would imply a complete federal takeover of the insurance industry. This would require the government to tell insurers that they must continue to offer plans even if they are losing money on them and even if the plans had lost most of their customers. This would at the least be a strange policy. It would be surprising if many people thought this was the meaning of President Obama's pledge.

This is happening for one reason and one reason only--because if you make Obama=Bush, you've made the day of someone who wants America to fail.
Seriously, what do Republicans have for ideas? They have nothing. Their idea to shut down the government and stop Obamacare is the FAIL of the year. Why not laugh in their face and go back to trying to fix this thing?

If it were easy, we would have done this twenty or thirty years ago. The fact that we did it now should inspire people to have more courage, not less. The corporations and entities arranged against any overhaul of the health care system are going to stamp and scream as much as possible in order to try and make it look like government can't do anything right. If they're allowed to win, then government isn't worth fighting to improve.

This is a fight to improve what government is supposed to do. Lose this fight, and we're fucked.
on November 14, 2013