Time to Fleece the Flock One More Time 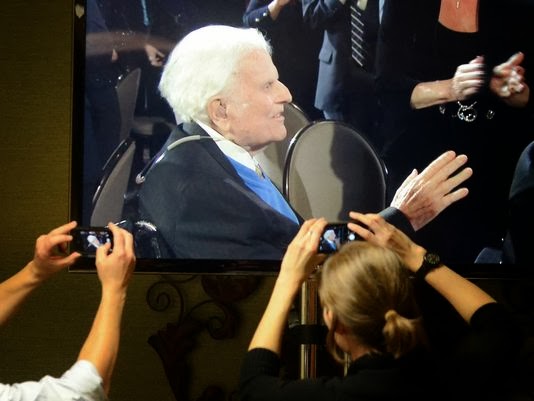 Billy Graham is back for more cash.

At 95 and in frail health, Billy Graham often resists family entreaties to make excursions from his mountaintop home. But the nation's most famous evangelist attended a birthday celebration Thursday night that featured hundreds of well-wishers and what is being characterized as his final sermon.

In a video that was recorded over the past year, Graham delivered his familiar message about the saving power of Jesus Christ and expressed concern about the nation's direction. "Our country's in great need of a spiritual awakening," he declared. "There have been times that I've wept as I've gone from city to city and I've seen how far people have wandered from God."

Graham, white-haired and heavier-set now than he once was, was brought into the ballroom in a wheelchair. Instead of speaking from the dais, he addressed the crowd through the half-hour film. It included photos and clips that underscore his ministry's intersection with decades of American life and politics, showing him alongside presidents (John F. Kennedy, Ronald Reagan, Bill Clinton) as well as with Martin Luther King Jr., Pope John Paul II — and Johnny Carson.

The American people have not wandered away from God. They've abandoned the fundamentalist Christian coalition that has fleeced the faithful and declared war on women. Billy Graham might die a decent and beloved man but his legacy will always be tainted by his close association with Richard Nixon and his insistence on putting God where he does not belong. He was the first televangelist, and look what that did to religion in America. We are a nation of secular intentions guided by secular laws and living in secular communities. The American system of government pays polite heed to the superstition but separates God and State as effectively as anything else.

Oh, and as a super special bonus, anyone who cites anything said by Founding Father John Jay should be required to note that Jay was an ardent anti-Catholic and those who carry on in his name have a certain bias.
on November 08, 2013