The Truth is Right In Front of You 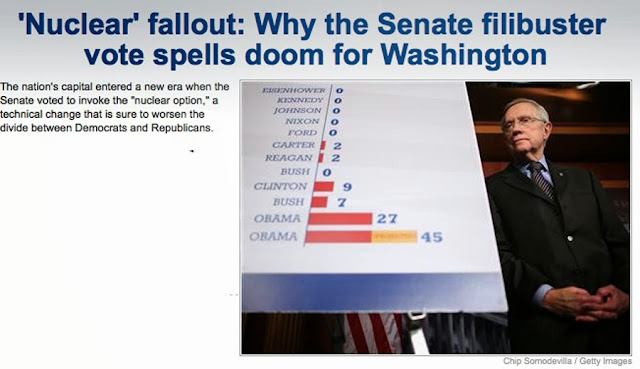 Our incompetent media is symbolized by the image of poor Chuck Todd, a braying, clueless and useful idiot who can't analyze anything. It's useless and broken--kind of like the Senate was until someone did something and made it possible to get things done.

Today's move was not an abuse of power. It was a response to the abuse of a tactic that obstructed government. If you don't mind, President Obama would now like to actually be President and get the judges and the cabinet officials he wants, please.

The narrative line from outlets like NBC is going to include terms like "doom" because they can't do basic math. Harry Reid brought them the answers they should be using right now. Under the Republican leadership in the Senate, a total of 45 people have had their nominations put on hold by filibuster, and that is more than six times the number of filibusters that helped keep extremists off of the courts during the Bush years (and that's important to note because, um, the Bush Administration really did politicize the courts and the Justice Department).

Facts mean nothing to our media. They see the Democrats grow a pair and they shit themselves with fear.
on November 21, 2013