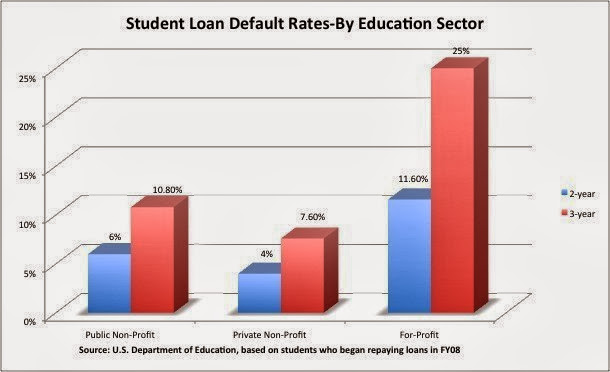 The graph that you see above is old data; it's from 2011. The wholesale scamming of money from Vets through the prism of the 21st Century GI Bill has not been addressed. What are these idiots screaming about? They could have done something years ago and they chose not to.

America made a commitment to veterans of the wars in Iraq and Afghanistan: In return for their service, the country would help pay for their college education when they came home.

Since the Post-9/11 GI Bill went into effect in August of 2009, the federal government has paid more than $30 billion in tuition and benefits, according to new figures from the U.S. Department of Veterans Affairs released on Friday. The VA said this money has now helped 1 million vets, servicemembers and their families get college degrees or technical training.

Most of this money goes to for-profit colleges and universities. Eight of the 10 schools receiving the most GI Bill dollars are for-profits, according to a 2012 report from the Senate Committee on Health Education Labor and Pensions (HELP).

Sen. Tom Harkin (D-IA), who chairs that committee, accuses some non-profits of using “predatory and deceptive tactics to target servicemembers and veterans for enrollment” in order to tap their federal educational benefits.

Tom Harkin has no credibility here, nor does anyone else in the Congress. Instead of bringing for-profit colleges to heel, they rolled over on regulating them and they have allowed the scam to continue. That's why the old graphic matters--it was plainly evident two years ago that there was a crisis because Veterans were throwing up their hands and choosing default when they couldn't translate their degrees into jobs . The Congress did nothing.
I used about two calendar years of my 3-year 21st Century GI Bill benefits. I have no student loan debt and I have my degree, a double major in History and English. It's a Bachelors of Science from the University of Maryland University College and it comes from a school that caters to Veterans and active duty service members. The only reason why this worked for me is because I didn't have to work for two and a half years. So, the benefit is still not generous enough and it should not go to any of the for-profit colleges that have issued worthless degrees to Veterans.
The transfer of education to Veterans that will help them get jobs should have been predicated on the idea that the only route to take would lead straight through an actual school or university with a credible degree program. The lobbying done by for-profit colleges and universities was successful. Veterans are not getting degrees or jobs, and they have been saddled with massive debt. Tom Harkin didn't do a goddamned thing to stop that when he could. Now we're supposed to believe this is news?
on November 11, 2013