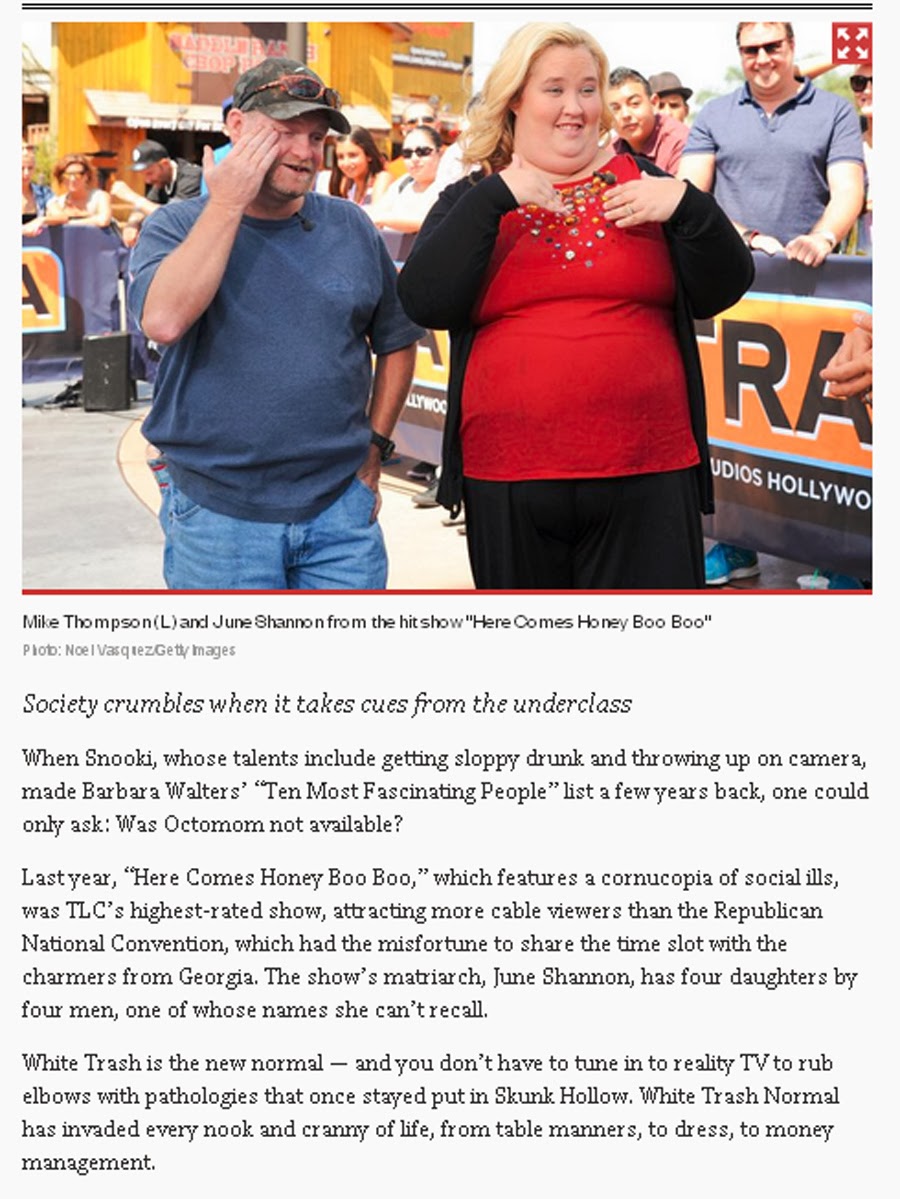 Charlotte Hays of the New York Post, which is America's worst newspaper, has decided to wade into the debate about the decline of American society. Having no original ideas, of course she's going to use reality television to make her case. In order to get there, she has to pretend to be shocked by the existence of a place called America that happens to have states in between the two coastlines. This is called Middle America and it is populated by millions of people who are sometimes poor and alien to people who live in places like New York City, her audience for the piece. Whenever someone throws around the name of Arnold Toynbee, duck. They're quoting books that are beyond their comprehension in order to establish themselves as superior and as an elitist.

Hays is a Southern writer, which means that she is going to see the world through a patriarchy and through the prism of class in a way that is intended to flatter people who think they ought to be running things. She actually signs off her piece with this throwaway:

The man in the gray flannel suit would be who, exactly? The white man in charge? The person who exists solely to bring an order to things? Genteel, of course, but never "trashy," except when compared to people who actually believe that there should be things like civil rights and equality. In the world of people like Hays, the pleading for civility is designed to establish the rule that you can't complain or comment about injustice because to do so would be to highlight just how backwards it is to expect everyone to be treated fairly.

The Honey Boo Boo phenomenon is old hat. This is about a year or so out of date in terms of relevance because America has moved on. And what Hays isn't about to admit is that this is a fake show and doesn't reflect America back at us. Do regular Americans have producers egging them on? Do regular Americans sign lucrative television deals in order to make sure that those same producers can shape and direct the action on camera?

Americans are not required to aspire to anything other than wanting to live their lives and be left alone. Reality television interrupts things and is an abnormal situation designed to entertain people. And, fuck your manners. At no point in our nation's history has there ever been an entirely polite and mannerly way of doing things. Our Founding Fathers rode a tiger called public sentiment and had to pay lip service to religion and higher ideals to keep the riff raff happy in their towns and drunk in their taverns.

Given the permanence of drunken shenanigans in this country, why would anyone be surprised that an elitist is pining for something that never existed?
on November 04, 2013