Staying on the Bank's Books Forever 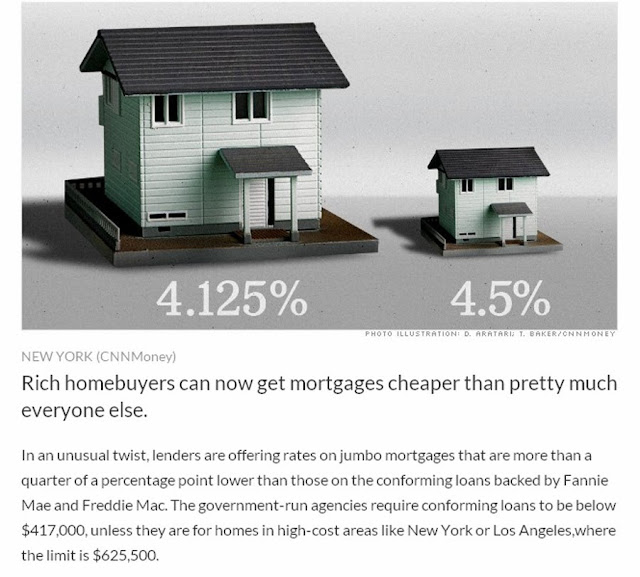 The advantages of wealth keep piling up.

We would like things to be fair, I suppose, but things being fair would immediately come under the heading of socialism! or worse. But when things are fair, consumers tend to have a little more confidence, I would imagine, since the inherently rigged financial system doesn't seem to be inspiring anyone anymore.

This is evidence that the game is rigged and that it is becoming institutionalized favoritism and that it is being rigged at a higher and higher level. Once you have eliminated the possibility that the wealthy can't help but get more favors and better rates than everyone else, the stratification of society is complete and there's no reason for someone willing to work and improve a property will try to get a mortgage. What incentive is there? Unless you're at a certain level, you're going to pay a higher rate and that will cut into your already razor-thin property margin.

I used to be down on the idea of "flipping" houses until I started watching some of what happens on channels like HGTV. Instead of being entirely a cutthroat operation, you see houses that are rehabilitated, brought back up to code, and sold for an honest profit after some investment and hard work has been done--nothing wrong with that. And I know it is difficult to signal a trend based on reality television programming, but the end result of a flipped house that sells for more than what it was sold is supposed to be a family living in a decent house.

When a family lives in a renovated home, it can save a neighborhood. It can lift the values of properties all around it. That's positive economic activity that should not be thwarted or discouraged by the unfair rate tiers given to the super wealthy who are simply trading in misery and ruin. I don't believe they are taking the time to invest in and flip houses. I think they're trading in assets that they can use to build a new and fancier version of the "big shitpile" made famous by Atrios.
on November 12, 2013