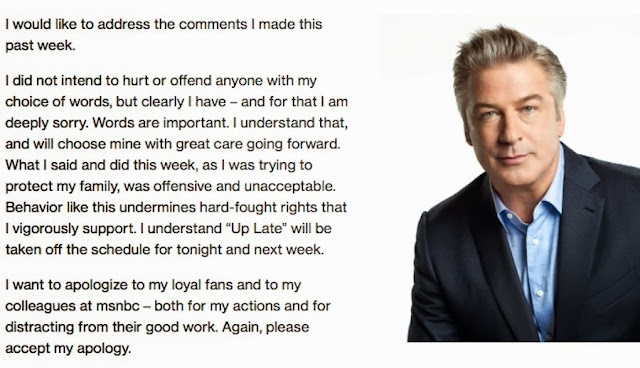 The definition of 'limousine liberal' is loosely based on the idea that conservatives need to find people on the left who they can bash at any cost. Wealthy people who support the left are called limousine liberals in order to discredit them and cause dissension among the broad numbers of people who identify themselves with liberal ideas and issues. Many of the derisive comments about limousine liberals are directed at people in the entertainment industry. Is it fair? No, but life is never fair.

It is fair to say that Alec Baldwin has led one of the messiest public lives in our time. He's not as bad as some, but he's bad enough that it is easy to make the case that MSNBC should have fired him outright. Whether it is out of loyalty or the money he made for NBC, I don't know. They have lavished money on him and they have used him to build their brand. He goes on Saturday Night Live once a year and that, in and of itself, creates a lot of buzz for the network. The show 30 Rock was never a ratings giant but it was a show that NBC executives could point to as being of a quality that did not embarrass anyone. Alec Baldwin, it could be said, was a good enough actor not to embarrass anyone while he performed his craft.

I say this because the public version of Baldwin is petulant and destructive. He can barely function in polite society because he has never accepted the fact that people want to take his picture when he's out and about trying to be seen. If you don't want to deal with paparazzi, don't walk around outside so much and go live in a gated community. He is not a feeding frenzy celebrity. But, somehow, he's really easy to find and they keep finding him and he keeps getting mad about it. A little reordering of priorities are in order.

His narcissism ran over his paranoia on the way to taking out a hit on his self-esteem. To further play the armchair quarterback, I think he has an inability to accept the fact that his film career was more Michael Keaton than it was Tom Hanks (the important number here being counted in Oscars, not dollars). The mere existence of someone like Ben Affleck, a man who can barely act and has so much less talent than Baldwin, has to make him want to gnaw the head off of a dead paparazzi. The fact that Bill Murray has a best actor nomination and he doesn't? Wow. His loss, for a best supporting actor Oscar, to Tim Robbins in 2004 may have put him over the edge. Who knows? It is without question that there are far too many actors of lesser achievement, ability, and talent who have way more accolades and Oscars and Oscar nominations than Baldwin. If this is the reason for his douchebaggery, fine. If not, then he's counting some other coin of the realm and he's coming up short enough to inspire some ridiculous public rage. All the damned time.

MSNBC is hoping liberals will give him a pass. He's done with getting those passes. Decent people should turn their backs on this man until he gets some help.
on November 16, 2013
Email ThisBlogThis!Share to TwitterShare to FacebookShare to Pinterest
Labels: Bigotry, Commentary, Entertainment, Ethics, Hate, Liberal, News, Opinion, Television