I Do Not Want Your Thanks or Your Pity 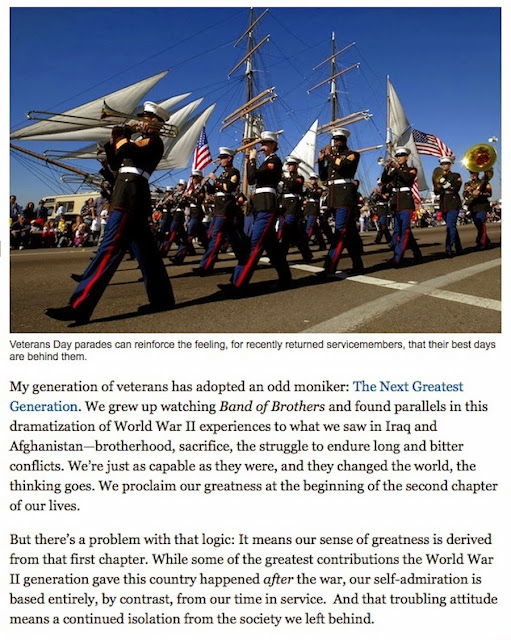 I like everything about this piece by Alex Horton. He is truly a gifted writer and is capable of commenting on these issues in ways that our media complex simply cannot comprehend. He's way more eloquent than I am on this subject.

But the missing word in this piece is "guilt."

Horton writes about the pedestal that Veterans are put on, and that pedestal is constructed on a bedrock of shame and guilt. There are many reasons for the pedestal, but the main reason that I see is built around two kinds of guilt. There is the guilt that civilians feel when they're reminded that there actually are Veterans who served while they did not and then there is the guilt that comes from the people who should be doing something to help Veterans and simply won't. They won't because it will cost them money.

In some ways, there simply is no shame left in America. None. Shame for not having done something to guarantee our freedoms? That's an antiquated, remote idea in American public life. What did you do during the war Mommy and Daddy. We made money. Oh.

You have virtually an entire generation that didn't have to join the military because they had the economic opportunity not to serve, and they took that opportunity and now they see all of the praise given to Veterans. But it's hollow praise and it's based on the idea that they somehow need to feel sorry for the people who joined because they didn't have any other skills. That mindset has translated into "thank you for your service but we're looking for someone else" because "you would be qualified, except you couldn't make it in the real world, so you had to join the military." That pity is killing more Veterans than anything else because not allowing the normal to come back into their lives is what is exacerbating the economic cutoff and the social cutoff that keeps people from getting help and from getting their status in our society back.
Don't give them your pity. Give them a job, quit cutting their benefits, and quit running a for-profit educational system that is systematically draining people of money while giving them useless degrees.

What about the Veterans who are actually serving? We're kicking them out, we're housing them in cramped quarters, and we're denying them the right to register their legal spouse just because some Red State governors want to make a stand against gay marriage. How's that supposed to honor people who are serving?
Then you have all of the substandard people now serving on active duty who go out and kill themselves even though they have never been deployed. Why is that? Guilt, perhaps, but also a lowering of standards. We are still trying to force a military with 19th Century rules into a 21st Century reality without even bothering to figure out who is able to put something else ahead of their own basic needs and adapt to military service. They are on the pedestal, but they are failures at almost every level. We're not serving them well, either.

So, it's Veteran's Day, and no one talks about the guilt. The guilt of not having served and the guilt of serving while being a hot mess. Figure out where the guilt comes from and then we can have a discussion about why this generation is no different from any other. The "greatest generation" theme is badly flawed.
I dread Veteran's Day precisely because we use it to give false thanks and praise to people who need health care, jobs and a way back to a normal life. We just shut down the government, slashing these people out of their attempt at getting to normal, just so some wingnuts could stand at the edge of the World War II memorial and scream at some Government employees.

I am proud of my 7 years on active duty, grateful for never having heard a shot fired in anger, and I wish I had done more and been better at my job. Would I do it all over again? Of course not. This country thinks I'm a sucker because I put on the uniform.
on November 11, 2013