How I Graduated at 44 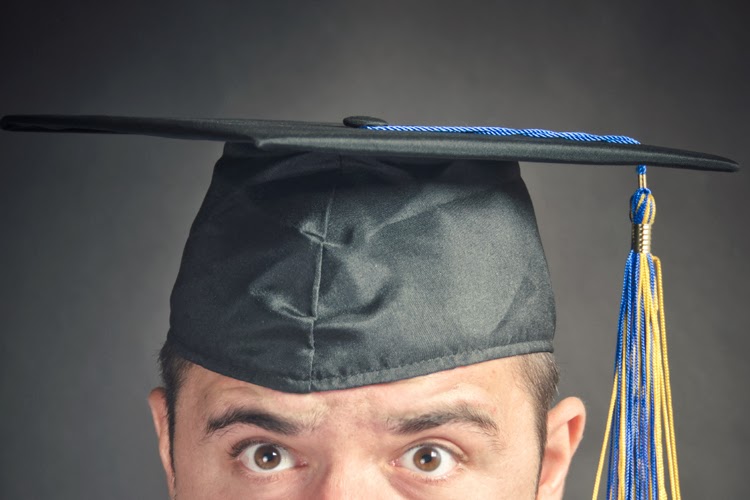 There was no chance for me to wear a cap and gown because my graduation ceremony was a continent away.

When I graduated from the University of Maryland University College last year, I was sent an invitation to my graduation ceremony. I had my degree in hand almost exactly a year ago; graduation was May, 2013.

Credential inflation is the rise in educational requirements for jobs as a rising proportion of the population attains more advanced degrees. The value of a given educational certificate or diploma declines as more people have one, thereby motivating them to stay in school longer. In the United States, high-school (i.e., twelve-year secondary school) diplomas were comparatively rare before World War II; now high-school degrees are so commonplace that their job value is worthless. University attendance is now over 60% of the youth cohort, and is on the way to the same fate as the high-school degree. It is a worldwide trend; in South Korea, 80% of high-school graduates now go on to higher education. The main thing that inflated degrees are worth is to plough them back into the educational market, seeking still higher degrees. This in principle is an endless process; it could very well reach the situation of the Chinese mandarin class during the later dynasties, when students continued sitting for exams into their thirties and forties— only now this would affect the vast majority of the population instead of a small elite. Different countries have gone through educational inflation at different rates, but from the second half of the 20th century onward, all of them have followed this path.

Educational degrees are a currency of social respectability, traded for access to jobs; like any currency, it inflates prices (or reduces purchasing power) when autonomously driven increases in monetary supply chase a limited stock of goods, in this case chasing an ever more contested pool of upper-middle-class jobs. Educational inflation builds on itself; from the point of view of the individual degree-seeker, the best response to its declining value is to get even more education. The more persons who hold advanced degrees, the more competition among them for jobs, and the higher the educational requirements that can be demanded by employers. This leads to renewed seeking of more education, more competition, and more credential inflation.

What is described here is a kind of circle jerk: you're never going to get ahead because everyone else is trying to outdo you in the quest for the perfect job. I would argue that a job that requires an advanced degree, or several degrees, is a job that becomes less attainable because there are so many people with lesser degrees willing to work cheaper at the same task.

If you consider the coveted prize to be a position where someone is a tenured professor at a university, let's look at the trends. By and large, that tenured position is under siege. It may require a PhD to get there. But the university knows it can hire two people with Masters degrees to teach the same coursework. They can pick up adjunct faculty, pay them a lot less, discard them when they ask for more money, and they can keep raising tuition. The product is the course schedule, not the professor. Instead of adding more dead wood in the personage of the old, litigious tenured professor, why not get two part-time prospective professors right out of graduate school and pay them nothing to deliver the product that matters?

I had a fair number of these professors. They weren't all awful but they weren't always a great experience. Do I now go fight my way into graduate school and try to become a professor who will work cheap and teach online courses?

Nope. The ones who are willing to work cheap, and already have their degrees, have saturated the market. I work in an industry where my Bachelors of Science is all the degree that I need right now, barring some new trend in being over-educated which could force me to go back to school in my 50s. There's no point in trying to attain more education when there's no where to land once the degree floats down from above. So, with one fewer person in grad school, problem solved.
on November 25, 2013