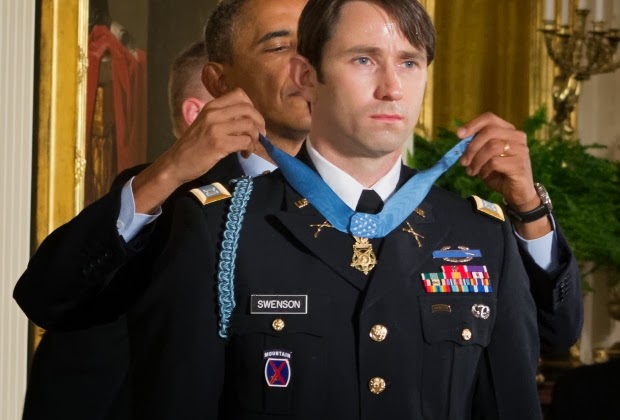 Army Captain William Swenson was awarded the Medal of Honor in spite of the fact that General David Petraeus actively and knowingly shit-canned the award:

The letter — a copy of which was obtained by McClatchy — gave no reason for Petraeus’ decision and it didn’t identify the retired Army general by name, referring only to the “former commander, USFOR-A,” the initials of the U.S. force in Afghanistan. According to the findings of a 2011 internal U.S. military investigation obtained earlier this year by McClatchy, Petraeus reviewed and signed Swenson’s Medal of Honor packet on July 28, 2010.

In an interview with McClatchy last year before he resigned as CIA director, Petraeus said he had “no recollection” of ever seeing Swenson’s file, a telephone-book-size three-ring binder comprising sworn statements, maps, photographs and other documents supporting the nomination.

Petraeus was actively involved in shaping the leadership of the Army in his own image. He was promoting his guys, ending the careers of officers who were not on his "team," and he simply could not tolerate the things that this lowly captain with his complaints about not getting any support was saying about the leaders that Petraeus was grooming for better things.

His assertion that he "did not see" the award is laughable. He then advised that it be downgraded. Which answer is it then? If he didn't see it, what the hell was he doing? Was he incompetent or is he a bad liar? It was his job to review and sign off on the processing of the medal.

The damage done to Swenson is nothing compared to the fact that the ranks of the Army are still seeded with what Petraeus wanted to see--loyalists and lackeys who owed him favors. Now that he has no power or influence, those officers are cast adrift but they still advanced themselves at the cost of others. How many leaders did we lose thanks to the efforts undertaken by Petraeus to reshape the leadership of the Army? Does it matter now that the size of the Army is shrinking?

Swenson is no longer on active duty but he is still a commissioned officer; I wish people would get that part correct. The Army doesn't really have much say in whether or not it "takes him back." In reality, he left active duty but he did not resign his commission. If he meets the standards for active duty service, how can they stop him from serving? The modern Army is desperately short of captains.
on November 08, 2013