Chris Christie Will Roll Through the Republican Primaries 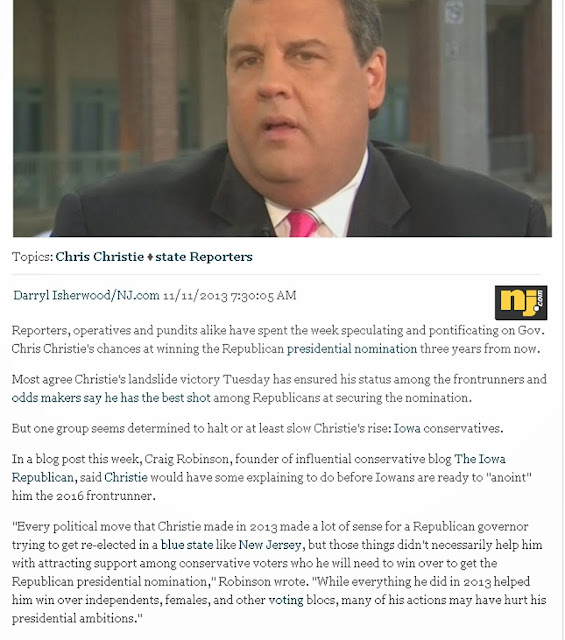 There are two things that will guarantee a Chris Christie victory in the Republican Primaries (Iowa is not relevant to the discussion). One, he has to raise a lot of money. Two, he has to smell like a winner.

All of the reservations being expressed right now mean nothing. It's so early in the process, you can practically smell the flop sweat rising on people who know they have been damaged and broken. Nobody who ran in 2012 should even consider running. They couldn't beat Mitt Romney? How are they going to beat anyone nominated by the Democrats?

The Republican Primary voter won't even remember the Tea Party in 2016. They'll latch on to a winner and swallow whatever reservations they have and they'll take that to the general election. Nobody wants to associate themselves with the two greatest losers of the modern era--John McCain and Mitt Romney. And I'm not convinced that Romney won't run again. I'll bet you that he will and that he will be difficult to dislodge from his place as the presumptive lifelong nominee of the Republican Party, a la Harold Stassen.

If Christie gets the nomination, his pissed off conservative act will play well with a fading demographic. I think that the only choice the Republican Party has is to nominate a woman to be President. The country has shifted so far left that it doesn't matter what the voters in a large swath of the country think. How many big states can Christie win when the Democrats already have a lock on California, New York, and Illinois? The Democrats can count on starting any race with somewhere near half of what they need to win without having to spend any money in those places. The Republicans have to count on a demographic that is dying off at an rate that is accelerating every day. They keep turning off women and they keep turning on their base. You can't win elections with Chris Christie's veiled threats and screaming into the faces of voters. They'll be easily overwhelmed by an Electoral College lockout that will guarantee a Democrat will win. At some point, Texas is going to tilt Democrat. What then?
on November 11, 2013