Bill O’Reilly is Running Out of People to Hate 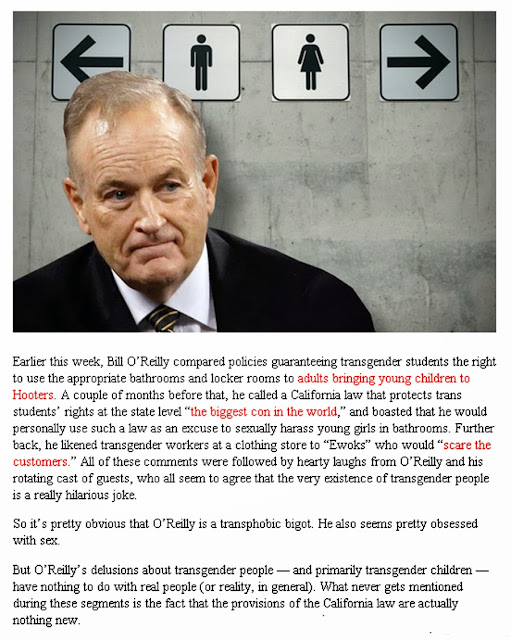 One of the last groups you can safely hate in America are people with transgender characteristics. There are a number of people who fall into the category of transgender and they deserve all the rights and the protections every American should be afforded. We are so heartbreakingly slow about guaranteeing rights to people that it should be a no-brainer--discriminating against transgender people is wrong.

And Bill O'Reilly knows he's wrong, but he's safe when it comes to making fun of transgender people because his employer won't feel any heat for his actions. His geriatric demographic isn't going to break out into an impromptu boycott because O'Reilly had the good sense not to mock the wrong kind of people. He knows that he has to champion the attitudes and opinions of a rapidly fading population of people who have organized their lives around hating the Other. This is in direct conflict with their faith, of course. Their Christianity hasn't caught up with us yet. And that's the inherent tragedy--transgender rights are so far behind the curve right now that it is permissible for this man to say and do what he's doing precisely because he knows that accountability is years away.

The business community has failed to elevate transgender issues to a level where someone like this could be frog-marched out of the building in which he works with someone trailing behind with his belongings.

I remember two things. I remember when sexual harassment in the workplace got to be a serious enough issue for people to hold classes and fire people who engaged in the practice because it was a liability. Transgender people should have the same recourse under the law when they are discriminated against. That will force companies to adopt a high standard and remove people with questionable ethics. And I remember when my employer, in 1995, put out a memo specifying that there was a bathroom designated for an employee with transgender issues. That was almost twenty years ago and we are still talking about bathrooms? Bathrooms?

Come on. This is a no-brainer. Accommodate people and respect their rights. Why be an asshole like Bill O'Reilly?
on November 14, 2013