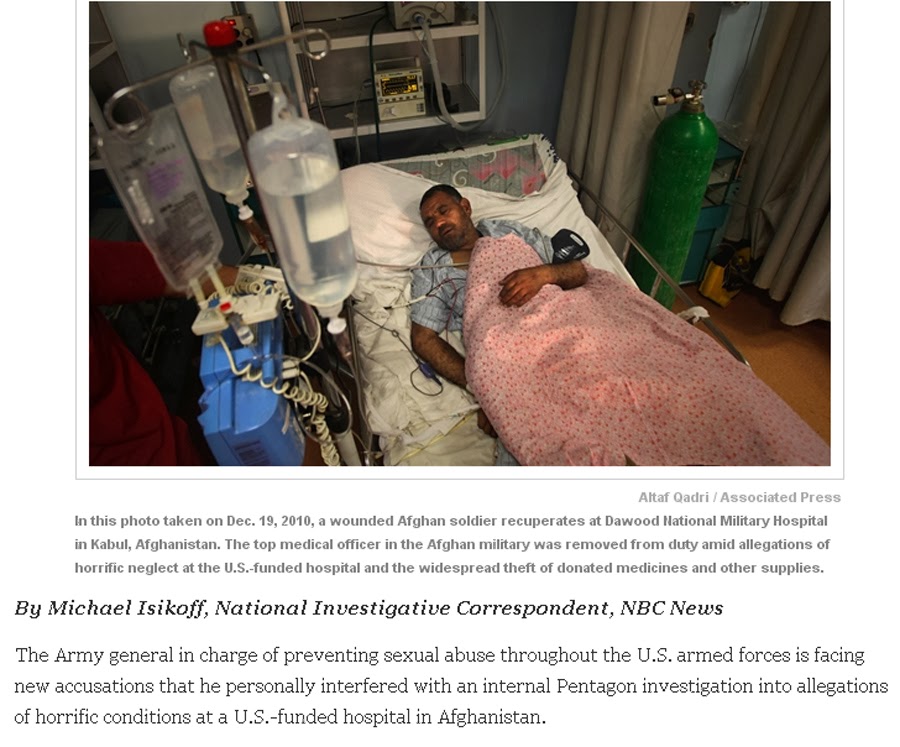 There is a significant scandal brewing and it involves a general names Patton who has gotten caught trying to cover up just how incompetent our management of the Afghan War has been in the last few years. The evidence suggests that we haven't won any hearts and minds and that we are leaving behind a legacy of corruption and poorly-set bones.

Speaking publicly for the first time, Navy Lt. Commander Jeremy Young told NBC News that Patton cut off him off and upbraided him when he tried to brief investigators from the Defense Department’s inspector general’s office about the maltreatment of patients -- including one whose bones had been misaligned through a botched surgery.

“Gen. Patton gets me cornered in the hallway, he puts his finger in my chest and he says, ‘You need to stay in your f------ lane, lieutenant,” Young said, describing what took place during a February 2011 tour of the hospital by a team from the Inspector General’s Office. “If you don’t know about bones, you don’t talk about bones.”

Young, a nurse anesthetist, said he replied: “But sir, I’m the only one who knows about bones.” Patton then repeated himself, Young said. “You are to stay in your f------ lane.” Patton’s statements led him to cancel the briefing because, Young said, “It was very clear there would be repercussions.”

Two other service members at the hospital that day corroborated portions of Young’s account. One of them, Army Col. Mark Fassl told NBC News that he was standing outside a crowded hospital room that day listening while Young was briefing the inspector general’s team, showing them the badly misaligned bones of a suffering Afghan soldier.

When an Army general tells someone in another service to "stay in your fucking lane," it means that the Army general is hoping that someone will bail him out of a problem. He's hoping that the man or woman, who is subordinate to him in rank but is not responsible to him, will shut up long enough so that the problem will disappear. Once the problem disappears, he can then go back to shining his resume and looking hopefully in the direction of someone who might get him another star or a choice billet somewhere.

General Patton has tried to save his career by threatening others. This kind of thing illustrates that, when it comes to the military, you don't have to follow an unlawful order. It speaks to the reason why "following orders" is a lame excuse. Not only do we have a military where this kind of thing is discouraged, it almost never works out for the bully who thinks that shortcuts and threats will work.

At some point in his career, General Patton has probably said, "don't you know who I am?" in a huff.

The general should welcome the sight of his retirement packet as it floats through S-1.
on November 15, 2013