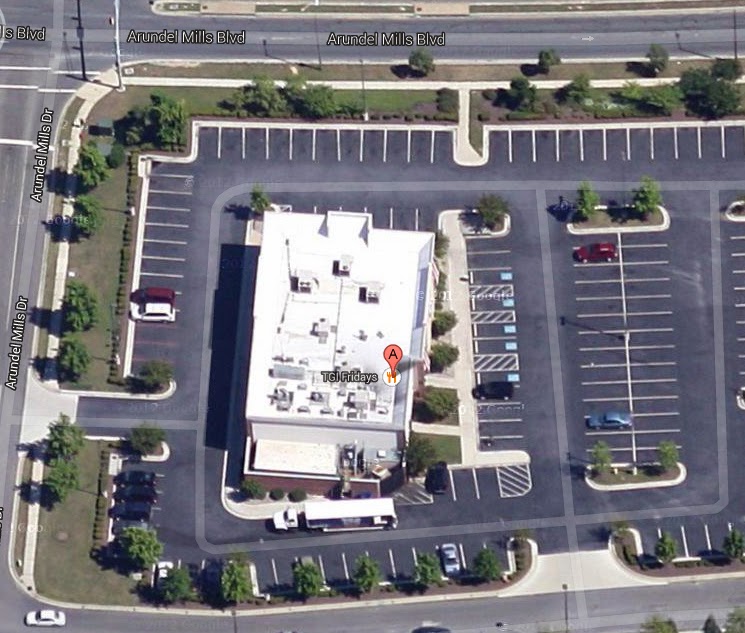 Thanks for trying to kill me this morning.

At around 11:35 AM, you tried to run me down in the parking lot of the TGIFriday's restaurant at the Arundel Mills Mall. You were driving an SUV and the license plate, Maryland Plate M254411, was given to Anne Arundel County Police via 911 call. I'm putting this out there because I just don't care about your feelings or your vehicle because, well, we know what you thought of me this morning. I was someone you figured could be scared into never walking across a parking lot in front of you again. Fuck you, by the way. Having never seen you before, I know one thing. I'll be glad to testify against you.

I do take it personally when people try to kill me. Intentionally. By accelerating their vehicle while I'm walking in a parking lot. By passing close enough to me to touch me with their vehicle. And by honking you seemed to assert the right of way. In parking lots, there really is no right of way because it is private property. There is a fundamental belief that running people over isn't the way to do things. I don't really know the law, but I do know that when you stopped and started jaw jacking with me, a number of people immediately began to act on my behalf because what they witnessed crossed the line from inadvertent mistake into an act of violence.

Who else have you done this to? I don't mind saying this--I hope I'm the first person you've tried to kill and hopefully I'll be the last one because not everyone will stand there and confront people who don't care about the basic rules of decency. So, instead of this being about me, think of all of the other people you've tried to run over. This one's for them. I like to use words to afflict the comfortable and comfort the afflicted. They used to call this journalism but that died and so now it's called blogging. It doesn't pay anything and you have to put up with crap. I do it because I'm not afraid of people like you. I think that you should be afflicted in a way that is appropriate for our society because what you did was irresponsible and dangerous. You could have hit other people today as well.

My mistake was turning and hitting your passenger side window hard enough to make you stop and then standing there. I should have run away and cowered under a dining table. Instead, I popped your window with my fist and scared the crap out of you and the passengers in your vehicle. I'm surprised that you allowed your friend to get out and get in my face. She was immediately set upon by two of the witnesses and put in her place, even though she called one of them a bitch and acted like it was your right as the driver and her right as the passenger to run people down in a parking lot.

You don't get to try to run me over and then make it my fault, especially when you hit your gas and did what you did, which is what caused the witnesses to get involved when most people could care less. You crossed quite a few lines by gunning your engine. You don't get to try and kill me and not have me write about it, either. That's kind of what I do.

With the size of your SUV being what it was, it could be said that you were being a bully. In point of fact, you were attempting to intentionally injure a pedestrian with a motor vehicle. I hope that the Anne Arundel County Police do treat you fairly and actually do something about this incident. Given how busy the police are in the Arundel Mills vicinity, I doubt anyone will inconvenience you and try to find out why you thought it was okay to try to run me over.

Decent people don't run others over on purpose. In case you don't get it, the reason why I'm still alive is because you were stupid enough to hit the gas and honk at me as if you had the right of way. That's why your passenger side window got popped. You don't get to come at me. I'm no different than anyone else and I'm not one of these tough guys on the Internet. Your friend seemed to think I had come down to your level by hitting your window. Sorry, but I did it to call your attention to an unsafe act. Your window isn't broken and Thank God I'm still alive. But you probably don't care so whatever.

The fact that you and your passengers were all women is probably why I'm not still throwing pieces of your vehicle around for fun. In a less polite society, I don't know what would have happened. I was pretty mad, and I wasn't happy about the fact that your passenger got in my face and asked me what I was going to do about the fact that you tried to kill me. Typically, in a situation like that, I don't know what I would do. I do know this--I dearly wanted to pull the keys out of your ignition and begin dismantling your vehicle for fun by hand. Call me crazy, but once you get the doors off, it's like riding a bicycle.

The adrenaline rush that I get is amazing. I haven't had this feeling in a long time. It's scary enough as it is, but I'm pretty sure that I don't want to feel like this again so please stop trying to run people over on purpose.

Had you actually hit me, there's a very good chance that I could have bled to death before an ambulance could arrive because I have to take medication which thins out my blood. I have to remember not to get involved in anything physical for that reason. I have to go to the hospital immediately if I notice severe bruising or if I hit my head. Hitting your window with my hand didn't even hurt so, don't worry. I don't have to go to the emergency room and get it checked out. I tend to have some self control. Not much, but enough to take a picture of your vehicle and tell the police what you did and who you are.

I suggest you don't kill people. In this day and age, they do tend to lock people up for it and get all upset.

And, yes. It was hilarious watching your passenger scurry back to the vehicle, get in, and urge you to flee the scene of an attempted murder. All of us heard her tell you to get out of there. All of us watched you panic and drive away as fast as you could after I made it clear to you that I was calling 911 in order to have Anne Arundel County Police come and sort out the situation. How smart was that? We all laughed when you drove away. The 911 operator that took my call really wasn't in any mood to hear from me so I suppose you'll get away with it, but that wouldn't surprise me. Petty things like this in the vicinity of Arundel Mills are keeping people away from that place. It's like the wild west over there nowadays.

It's my belief that you just have to let the cops sort it all out. The cops need to sort out Arundel Mills, and fast. We can't let people solve their differences by running over pedestrians. You cannot take the law into your own hands. You have to stop yourself from dismantling a car by hand and you have to try to remain calm. I have no idea why I am not being evaluated in the hospital right now after kicking in a windshield and throwing a rear SUV hatch across the highway. No idea. On many different levels, that's probably what I should have done because getting you off the road would probably save lives.

Lunch was fabulous, by the way. My day continues, and I get to write about it and live a good life. For that, I am grateful. But, I have a responsibility to ensure that people like you aren't out there, running over helpless people. Sorry, but you tried to kill someone who is anything but helpless today. And a veteran, too. On Veteran's Day.

Why don't you turn your car keys in and get off the road? Why don't you get help for your insecurity and your inability to function in polite society? Did you lose a fistful of money at the casino?

Honestly, I stopped thinking about you when I hit publish.

UPDATE: More than 24 hours after the incident, nothing. Anne Arundel County Police have not attempted to find the driver. They have issued a "look out" for the vehicle so, unless the tag is run somewhere, forget about it. This is why I tell people that you have to respect the rule of law and accept the fact that people just don't give a shit about anything. They will run you down and the cops won't do anything and as soon as you take the law into your own hands, suddenly, that's the only crime they're going to pursue or investigate and they'll light you up like a Christmas Tree and go after you, not the person who taunted you after trying to kill you. People can do whatever they want. What? Someone's gonna complain? Too bad.

In other words, another day in paradise, bitches.
on November 11, 2013