Time For a Third Party 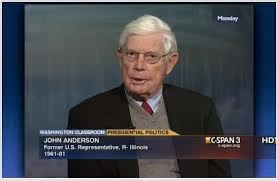 I wish I had a better image of former Presidential candidate John Anderson. He was the Republican who originally tried to bring a degree of sanity to the party but the insanity swamped his boat and he was left with his pension and whatever else he had. In the fevered imagination of Erick Erickson, there are the beginnings of a third party movement that would do Anderson proud:

I’m being told by several sources that Speaker Boehner and Majority Leader Eric Cantor are plotting to give up trying to either defund or delay Obamacare.

This comes at the same time the Obama administration admits it will be months before their Obamacare website will be fixed and Kathleen Sebelius is saying if people want out of the mandate they can pay a fine.

Nonetheless, Cantor, Boehner, and with them Mitch McConnell and John Cornyn are expected to cave in and fully fund, unimpeded, Obamacare.

In doing so, they will sow the seeds of a real third party movement that will fully divide the Republican Party.

It is already divided. The Tea Party is the third political party in America, and it is an abject failure. Conservatives already command the agenda and the debate in this country; the next time you see someone being mean to a Republican, count how long it takes for the media to roll over and yell "both sides are to blame!" and then concede that the Daddy Party is in charge of things that matter.

If there is a split that widens the gulf between the Tea Party and the Republican Party, we will see a third party presence in the 2016 election. We will see talk of secession and nullification. The crazies will march and the thunder on the right will confuse our media elites so much that I don't think it would be possible for a Democrat to lose in 2016 even if they were incompetent or John Kerry or both.

This will all end in screaming, and it will either turn out like Ross Perot or like John Anderson; and who gets hurt will be the people who will have been enjoying their health care.
on October 10, 2013