London to Beijing by Train 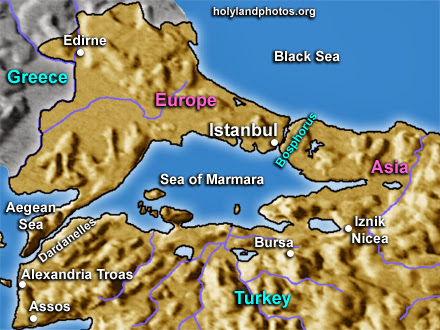 Turkey wants to build an earthquake-safe tunnel under the Bosphorus and connect Europe and Asia with as little fuss as possible. The importance of Turkey in world affairs continues to be a source of conflict, however, and you can lay this at the feet of the man who would be Pharoah:

[...] critics of Prime Minister Erdogan have seen the tunnel as one of his grandiose construction projects for the city where he used to be mayor.

Detractors of his proposals, including a third airport, a parallel canal, a third bridge over the Bosphorus and a second tunnel, for cars, south of Marmaray, say they illustrate Mr Erdogan's "pharaonic" ambitions.

Authorities came under fire earlier this year when protesters opposed plans to redevelop a park in Istanbul. Widespread violence between anti-government demonstrators and security forces ensued.

The rail tunnel will not be fully operational after its official opening on Tuesday, AFP reports.

"The part that is in service is very limited. All that has been delayed until much later," said Tayfun Kahraman, president of the Istanbul Chamber of Urban Planners.

"We are wondering why this inauguration is happening so soon."

Russia is in steep decline. Freedom and fundamentalism are struggling inside of Turkey, and I would bet on whichever side is willing to cut some deals and open up this trade route.
America's contribution to all of this was to create the failed states of Iraq and Afghanistan, destabilize most of Turkey's neighbors, and allow Japan and China to march in and strike deals. Brilliant.
on October 29, 2013