Glenn Taylor is the Dumbass of the Year 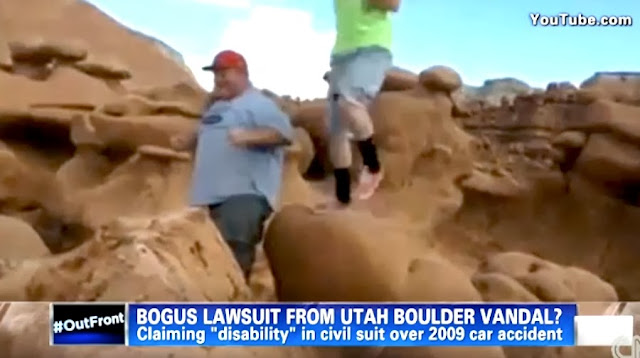 That's Glenn Taylor, rocking the grey t-shirt and he might just be the dumbass of the year.

Taylor and his dumb, stunt-filming buddies have been ejected from the Boy Scouts and are facing possible legal ramifications for destroying a natural feature in a state park. Now, come to find out, he's a deadbeat trying to catch some disability money raining down on his goofy head:

The attention has led to revelations that Taylor filed a personal-injury lawsuit in September, claiming he had suffered "serious, permanent and debilitating injuries" from a 4-year-old car crash.

"Someone with a bad back who's disabled, who can't enjoy life, to me, doesn't step up and push a rock that big off the base," the defendant in Taylor's lawsuit, Alan MacDonald, told Salt Lake City television station KTVX.

Taylor's lawyer did not return calls for comment. But when CNN affiliate KUTV noted that Taylor didn't look particularly debilitated in the video, he replied, "You didn't see how hard I pushed."

CNN Legal Analyst Danny Cevallos said when someone has a pending disability lawsuit, "You'd think they'd avoid the camera like the plague.

"But instead, they think no one will ever see it or repercussions will ever come of it," Cevallos said.

A breathless nation, shocked by the sheer dumbassery evident in the video, can't wait to find out.
on October 22, 2013