Don't Pretend to Care About Veterans After Shutting Down the Government 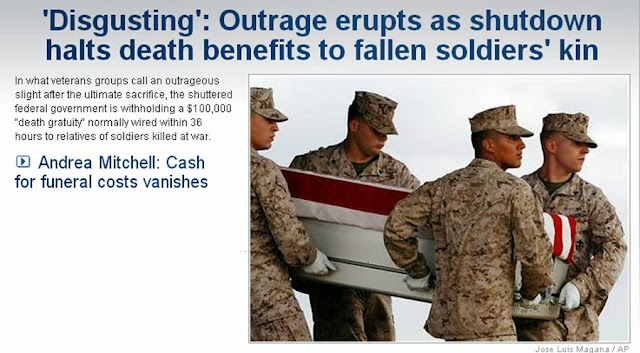 In case you missed it, the same people who are now scrambling to restore the death benefits for fallen soldiers are still holding fast to the idea that it is perfectly acceptable to slash the food stamps that deployed soldiers use to feed their families.

They can shut down the government and screw everyone but when some aspect of that becomes too politically charged, these "leaders" will do whatever it takes to turn the headlines around. The families of Veterans are overwhelmingly in the lower economic brackets of our society and these are the people that the Republican Party are punishing in order to balance their phony austerity budgets. When have we, as a society, ever been this schizophrenic? You love Veterans? Really? Then why are you hurting them like this? Why did you insist on sequestration, which further threatened Veterans benefits?

Republican family values demonstrate that it's perfectly okay to hate and hurt the poor. But when they're Veterans, it's a strategic imperative to make the media see that they are willing to pay out the benefits for the dead while cutting what little their families get to buy food.
on October 08, 2013